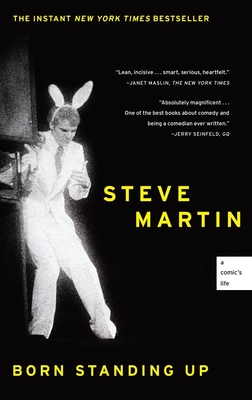 The riveting, mega-bestselling, beloved and highly acclaimed memoir of a man, a vocation, and an era named one of the ten best nonfiction titles of the year by Time and Entertainment Weekly.

In the mid-seventies, Steve Martin exploded onto the comedy scene. By 1978 he was the biggest concert draw in the history of stand-up. In 1981 he quit forever. This book is, in his own words, the story of “why I did stand-up and why I walked away.”

Emmy and Grammy Award–winner, author of the acclaimed New York Times bestsellers Shopgirl and The Pleasure of My Company, and a regular contributor to The New Yorker, Martin has always been a writer. His memoir of his years in stand-up is candid, spectacularly amusing, and beautifully written.

At age ten Martin started his career at Disneyland, selling guidebooks in the newly opened theme park. In the decade that followed, he worked in the Disney magic shop and the Bird Cage Theatre at Knott’s Berry Farm, performing his first magic/comedy act a dozen times a week. The story of these years, during which he practiced and honed his craft, is moving and revelatory. The dedication to excellence and innovation is formed at an astonishingly early age and never wavers or wanes.

Martin illuminates the sacrifice, discipline, and originality that made him an icon and informs his work to this day. To be this good, to perform so frequently, was isolating and lonely. It took Martin decades to reconnect with his parents and sister, and he tells that story with great tenderness. Martin also paints a portrait of his times—the era of free love and protests against the war in Vietnam, the heady irreverence of The Smothers Brothers Comedy Hour in the late sixties, and the transformative new voice of Saturday Night Live in the seventies.

Throughout the text, Martin has placed photographs, many never seen before. Born Standing Up is a superb testament to the sheer tenacity, focus, and daring of one of the greatest and most iconoclastic comedians of all time.

Praise For Born Standing Up: A Comic's Life…

"Absolutely magnificent. One of the best books about comedy and being a comedian ever written." - Jerry Seinfeld, GQ

Steve Martin is one of today's most talented performers. He has had huge success as a film actor, with such credits as Cheaper by the Dozen, Father of the Bride, Roxanne, Parenthood, L.A. Story, and many others. He has won Emmys for his television writing and two Grammys for his comedy albums. In addition to his bestselling novel The Pleasure of My Company and a collection of comic pieces, Pure Drivel, he has also written a play, Picasso at the Lapin Agile. He lives in Los Angeles.
Loading...
or support indie stores by buying on