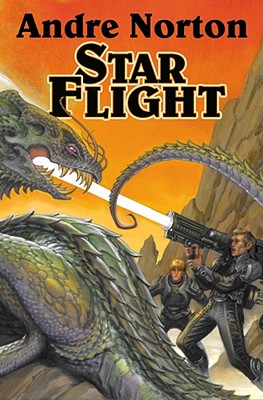 Two complete novels of courageous men and women whose only hope was escape in an untested starship to other worlds of bright promise--and unknown dangers:
The Stars are Ours Dard Nordis is a hunted man. His brother was murdered for covert activities as a scientist in a world which scientists and engineers are blamed for the global war that smashed civilization, and the global dictatorship of Pax has ordered their execution. Now he is on the run, trying to find the secret stronghold of his brother's friends and colleagues--a hidden place where the few remaining scientists are desperately building a spaceship to escape to the stars.
Star Born Centuries after the desperate flight from Earth, Pax has been overthrown and humanity again reaches for the stars. Rof Kurbi's spaceship reaches the planet Astra, not knowing that the planet already has a colony established centuries ago by the fugitive humans from Earth . . . and that the apparently friendly natives of the planet are actually malevolent invaders from elsewhere, who are plotting to eliminate all humans from Astra, both the recent arrivals and the star born colonists. Publisher's Note: Star Flight was originally published in parts as The Stars are Ours and Star Born. This is the first time both novels have appeared in one volume.