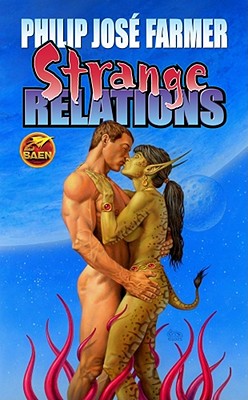 Two complete novels and five novelettes that broke new ground in science fiction and established Philip Jose Farmer as a master of the genre:

The Lovers: One of the most controversial and groundbreaking novels in science fiction. Sent by the religious tyranny of a future Earth to the planet Ozagen, Hal Yarrow met Jeanette, an apparently human fugitive, hiding in ancient ruins built by a long-vanished race. Unconsecrated contact with any female was forbidden to Yarrow—and love for an alien female was an unspeakable abomination. But Yarrow’s lifelong conditioning was no match for his strange attraction to Jeanette.

Flesh: The starship captain had been on a voyage lasting 800 years, and returned to find an Earth ruled by revived ancient pagan rituals. He was crowned the “Sunhero,” which was a very dubious honor . . . and unless he could escape, he would be the guest of honor at a fertility rite which would conclude with his very unpleasant death.

Philip Jose Farmer is a pioneer of science fiction. His stories were the first to explore alien sexuality, love, religion, and mythology. He has won numerous awards, including three Hugo Awards and the World Fantasy Award, and has been named a Nebula Grand Master by the Science Fiction Writers of America. In a long and distinguished career, he has published over seventy novels and story collections. The Encyclopedia of Science Fiction has called him "perhaps the most impish and anarchic" of major science fiction writers.
Loading...
or
Not Currently Available for Direct Purchase