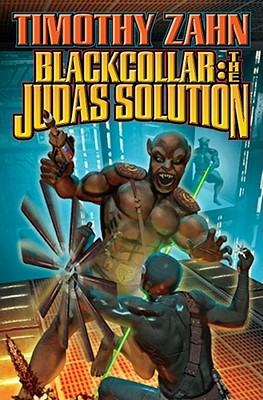 Damon Lathe and his blackcollar combat team were sent to capture five hidden Nova-class warships from under the Ryqril conquerors' snouts. Against all odds they had succeeded, sharing their prize with the Terran Democratic Empire's erstwhile Chryselli allies, who were themselves the current focus of Ryqril aggression. Lathe had followed that by successfully entering Earth's last mountain war-era fortress and found a small resistance movement's final project: a drug called Whiplash, which could break the supposedly unbreakable Ryqril loyalty-conditioning. Now they face their most serious challenge. On one of the conquered human colony worlds is a Ryqril tactical center through which flows an entire sector's worth of military data. If the blackcollars can find a way inside, it could tip the balance in the current Ryqril-Chryselli war. It could even start humanity on the path back to ultimate freedom. But the Ryqril aren't sitting idly by. Under threat of reprisals against his world, Prefect Jamus Galway of Plinry is already on the case. His plan: to turn the blackcollars and their combat skill into unknowing tools of the Ryqril. His hidden ace: a clone duplicate of Lathe's ally Allan Caine, ready to be slipped into Lathe's inner circle. It will be the blackcollars' most important mission. It may also be their last.

Timothy Zahn is a Hugo Award winner and the author of the New York Times #1 bestseller Heir to the Empire, as well as the best-selling Star Wars: Thrawn series of novels. Born in Chicago, he earned a B.S. in physics from Michigan State University and an M.S. in physics from the University of Illinois. He sold his first story to Analog in 1978, and immediately attracted attention as a new writer of science fiction based on real, cutting-edge science. Baen published his popular Cobra trilogy in one volume. His other popular series include the Conqueror and Dragonback novels. With David Weber and Thomas Pope, he is the author of novels A Call to Duty, A Call to Arms, and A Call to Vengeance. Zahn has written more than 50 novels, including the recent Cobra Rebellion series entries Cobra Outlaw and Cobra Traitor.
Loading...
or
Not Currently Available for Direct Purchase