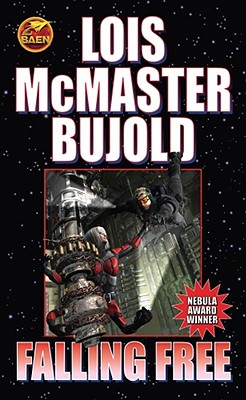 Leo Graf was just your average highly efficient engineer: min your own business, fix what's wrong and move on to the next job. Everything neat and according to spec, just the way he liked it. But all that changed on his assignment to the Cay Habitat. Could you just stand there and allow the exploitation of hundreds of helpless children merely to enhance the bottom line of a heartless mega-corporation? Leo Graf adopted a thousand quaddies -- now all he had to do was teach them to be free.

Lois McMaster Bujold is one of the most honored writers in the fields of science fiction and fantasy and has won six Hugo Awards and two Nebula Awards, including a Nebula Award for Falling Free, included in Miles and Metallurgy. She immediately attracted attention with her first novel, Shards of Honor, which began her popular Vorkosigan series, and quickly followed it up with The Warrior's Apprentice, which introduced young Miles Vorkosigan, one of the most popular characters ever in science fiction. Her recent fantasy series for Harper-Collins has been a top seller, and its second entry, Paladin of Souls, took home her latest Hugo Award. The mother of two, Ms. Bujold lives in Minneapolis, MN.
or
Not Currently Available for Direct Purchase
Copyright © 2020 American Booksellers Association