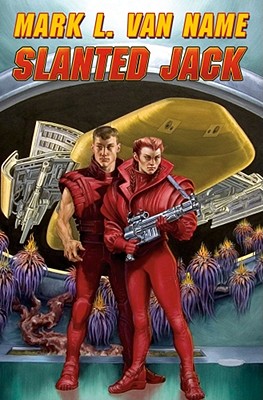 Mark L. Van Name's first book in the Jon and Lobo series demolished all the already high marketing projections. In Slanted Jack he's vaulting that stunning success with a novel that bobs and weaves, takes you on a headlong race through a strange but believable future, and never slows down. The job looks simple enough: Jon Moore, the nanotech-enhanced, world-weary, soldier of fortune, agrees to help a con man, a friend from a part of his past he'd rather forget, protect a very special young boy. The deal doesn't stay simple, as each move Jon and Lobo make results in more danger and more enemies. The situation grows even more complicated when a beautiful woman with an unclear agenda joins them in their quest. The best con man Jon's ever known, a ruthless gang boss, a heavily armed group of religious fanatics, and an interstellar government out to clean up a dangerous frontier world rush together toward an explosive climax -- and Jon and Lobo are caught in the middle. They're willing to do anything to save the life of the boy -- But there may not be anything even they can do Slanted Jack the second novel in the Jon & Lobo series.

Mark L. Van Name, whom John Ringo has said is "going to be the guy to beat in the race to the top of SFdom," has worked in the high-tech industry for over 30 years and today runs a technology assessment company in the Research Triangle area of North Carolina. A former Executive Vice President for Ziff Davis Media and a national technology columnist, he's published over a thousand computer-related articles and multiple science fiction stories in a variety of magazines and anthologies, including the Year's Best Science Fiction. Jon & Lobo stories have appeared in a Baen anthology and Jim Baen's Universe.
Loading...
or
Not Currently Available for Direct Purchase