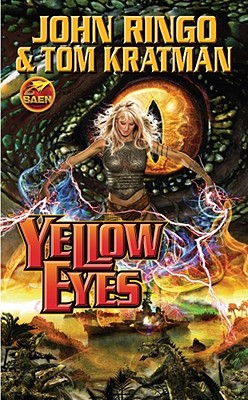 The Posleen are coming and the models all say the same thing: Without the Panama Canal, the US is doomed to starvation and defeat. Despite being overstretched preparing to defend the US, the military sends everything it has left: A handful of advanced Armored Combat Suits, rejuvenated veterans from the many decades that Panama was a virtual colony and three antiquated warships. Other than that, the Panamanians are on their own.  Replete with detailed imagery of the landscape, characters and politics that have made the jungle-infested peninsula a Shangri-La for so many over the years, Yellow Eyes is a hard-hitting look at facing a swarming alien horde with not much more than wits and guts. Fortunately for the human race, the Panamanians, and the many veterans that think of it as a second home, have plenty of both.

John Ringo is the New York Times best-selling author of the Black Tide Rising series, the Posleen War series, the Through the Looking Glass series, and more, including the Troy Rising series, of which Live Free or Die is the first installment. A veteran of the 82nd Airborne, Ringo brings firsthand knowledge of military operations to his fiction.