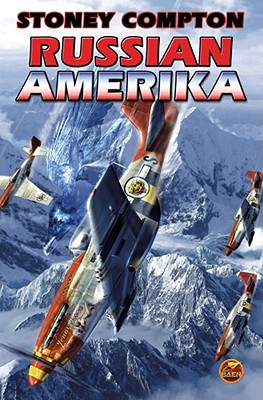 1.  To many Americans, and visitors from other countries, Alaska means adventure, romance, and excitement.  Russian Amerika delivers all this and more: Revolution against an oppressor, continent-wide alliances, and an epic struggle of a people to be free.

2.  This is the first alternate history novel to deal with Alaska and its Native people.

3.  Rich in detail, this novel offers both insight into Alaska's Native peoples and a rousing adventure yarn.  Its original setting will strongly appeal to fans of alternate history SF who are tired of variations on the American Civil War, World War II, etc.

Alaska, 1989. In a world where Alaska is still a Russian possession, charter captain Grigorivich Plesnett has a stained past – as a major in the Czar’s Troika Guard he was cashiered for disobeying a direct order. Now, ten years later, Grig charters out to a cossack and discovers his past has not only caught up with him but is about to violently change his future, and the future of all nine of the nations of North America as well. Spanning Alaska from the Southeastern Inside Passage to the frozen Yukon, this is an epic tale of one man’s journey of redemption and courage to face old challenges and help birth a new nation.

Stoney Compton has had novelettes and short stories published in Universe 1, Tomorrow, and Writers of the Future. He is Senior Graphic Artist for a Bellevue, Washington company, and has worked as a visual information specialist for NOAA, a graphic artist for the Alaska Dept. of Fish & Game, and a staff artist for a weekly newspaper. He was born in Nebraska, lived 31 years in Alaska, and now lives north of Seattle with his wife, Colette, and seven cats.