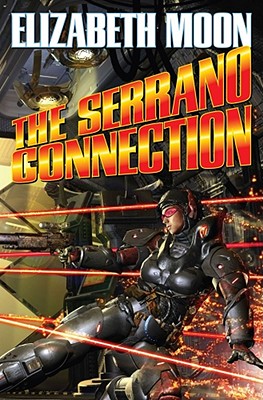 2.  This voulme combines the third and fourth in her popular Serrano/Suiza space adventure series.

Once a Hero: Esmay Suiza wasn’t a member of a great Navy family like the Serranos. She’d had to make her way on grit alone, which meant it wasn’t likely she’d make admiral, but all she wanted was to be part of the Fleet. But then she ended up a raging space battle, and was the only one who could stop a superior office turned traitor. She had never wanted to be a hero, but fate had other ideas. . . .

Rules of Engagement: Brun Meager is a young woman from a rich and powerful family, which had a lot to do with why Esmay Suiza didn’t get along with her, not to mention both having an amorous interest in Barin Serrano. When Brun was abducted by a repressive religious militia movement that makes the 21st century Taliban look like a bunch of Unitarians, Esmay was suspected of having connived in the capture to eliminate a rival. To clear herself, it looked like Esmay would have to locate and rescue Brun. Time to be a hero again. . . .

New York Times best-selling author and former Marine, Elizabeth Moon has written many novels, including the Paksenarrion fantasy trilogy (available from Baen as The Deed of Paksenarrion and also as separate books), the Heris Serrano space adventure series (the first three novels of which have been combined as Heris Serrano), and Remnant Population, which was a Hugo Award finalist. For Del Rey, she has written Command Decision, Engaging the Enemy, Marque and Reprisal, Trading in Danger, and the Nebula Award winner The Speed of Dark. After earning a degree in history from Rice University, Moon went on to obtain a degree in biology from the University of Texas, Austin. She lives in Florence, Texas with her husband and son.
Loading...
or
Not Currently Available for Direct Purchase