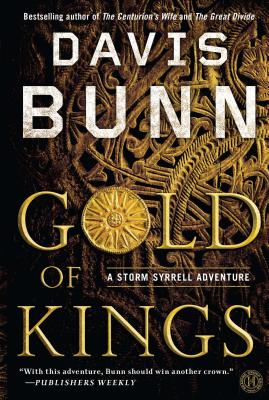 Investigating the murder of her grandfather, Storm Syrrell discovers that his arts and antiques business served as a front for secret international dealings. Not only did her grandfather know of his impending death but he also left her the responsibility for his lifetime quest.

Enter Harry Bennett, a professional treasure hunter just released from a Caribbean jail. And Emma Webb, a US Treasury agent with links to Interpol.

Their trail leads to London, France, Istanbul, Cyprus, and ever deeper into danger. A vital clue is discovered within the Copper Scroll of Qumran: Hidden beneath the dusty mysteries of two thousand years lies a fortune in gold with timeless significance.

With the tangled motives of greed and power coming into focus, something unexpected tugs at Storm. These treasures represent a vital connection to an ancient faith. Will her quest include a personal transformation as well?

Davis Bunn is the author of numerous national bestsellers in genres spanning historical sagas, contemporary thrillers, and inspirational gift books. He has received widespread critical acclaim, including three Christy Awards for excellence in fiction, and his books have sold more than six million copies in sixteen languages. He and his wife, Isabella, are affiliated with Oxford University, where Davis serves as writer in residence at Regent’s Park College. He lectures internationally on the craft of writing.
Loading...
or support indie stores by buying on