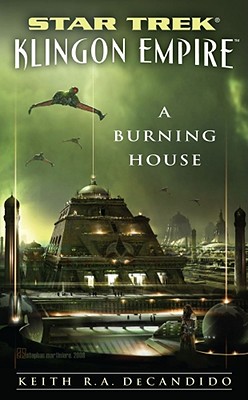 The Next Generation: Klingon Empire: A Burning House

They have been the Federation's staunchest allies, and its fiercest adversaries. Cunning, ruthless, driven by an instinct for violence and defined by a complex code of honor, they must push ever outward in order to survive, defying the icy ravages of space with the fire of their hearts. They are the Klingons, and if you think you already know all there is to learn about them...think again.

From its highest echelons of power to the shocking depths of its lowest castes, from its savagely aggressive military to its humble farmers, from political machinations of galactic import to personal demons and family strife, the Klingon Empire is revealed as never before when the captain and crew of the I.K.S. Gorkon finally return to their homeworld of Qo'noS in a sweeping tale of intrigue, love, betrayal, and honor.