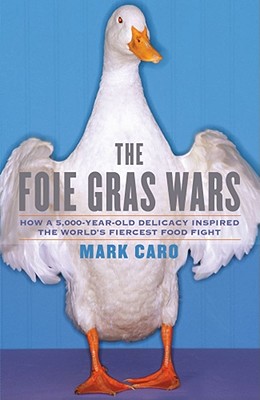 How a 5,000-Year-Old Delicacy Inspired the World's Fiercest Food Fight

In announcing that he had stopped serving the fattened livers of force-fed ducks and geese at his world-renowned restaurant, influential chef Charlie Trotter heaved a grenade into a simmering food fight, and the Foie Gras Wars erupted. He said his morally minded menu revision was meant merely to raise consciousness, but what was he thinking when he also suggested -- to Chicago Tribune reporter Mark Caro -- that a rival four-star chef 's liver be eaten as "a little treat"? The reaction to Caro's subsequent front-page story was explosive, as Trotter's sizable hometown moved to ban the ancient delicacy known as foie gras while an international array of activists, farmers, chefs and politicians clashed forcefully and sometimes violently over whether fattening birds for the sake of scrumptious livers amounts to ethical agriculture or torture.

"Take a dish with a funny French name, add ducks, top it all off with celebrity chefs eating each other's livers, and that's entertainment," Caro writes. Yet as absurd as battling over bloated waterfowl organs might seem, the controversy struck a serious chord even among those who had never tasted the stuff. Reporting from the front lines of this passionate dining debate, Caro explores the questions we too often avoid: What is an acceptable amount of suffering for an animal that winds up on our plate? Is a duck that lives comfortably for twelve weeks before enduring a few weeks of periodic force-feedings worse off than a supermarket broiler chicken that never sees the light of day over its six to seven weeks on earth? Why is the animal-rights movement picking on such a rarefied dish when so many more chickens, pigs and cows are being processed on factory farms? Then again, how could the treatment of other animals possibly justify the practice of feeding a duck through a metal tube down its throat?

In his relentless yet good-humored pursuit of clarity, Caro takes us to the streets where activists use bullhorns, spray paint, Superglue and/or lawsuits as their weapons; the government chambers where politicians weigh the ducks' interests against their own; the restaurants and outlaw dining clubs where haute cuisine preparations coexist with Foie-lipops; and the U.S. and French farms whose operators maintain that they are honoring tradition, not abusing animals. Can foie gras survive after 5,000 years? Are we on the verge of a more enlightened era of eating? Can both answers be yes? Our appetites hang in the balance.