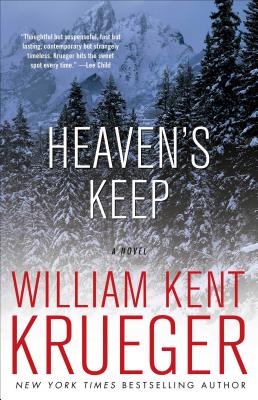 Intrepid hero Cork O’Connor faces the most harrowing mission of his life when a charter plane carrying his wife, Jo, goes missing in a snowstorm over the Wyoming Rockies.

Months after the tragedy, two women show up on Cork’s doorstep with evidence that the pilot of Jo’s plane was not the man he claimed to be. It may not be definitive proof, but it’s a ray of light in the darkness. Agreeing to investigate, Cork travels to Wyoming, where he battles the interference of local law enforcement who may be on the take, the open hostility of the Northern Arapaho, who have much to lose if the truth is known, and the continuing attempts on his life by assassins who shadow his every move. At the center of all the danger and deception lies the possibility that Jo’s disappearance was not the end of her, that somewhere along the labyrinthine path of his search, maybe even in the broad shadow of Heaven’s Keep itself, Cork will find her alive and waiting for him.

“A powerful crime writer at the top of his game.” —David Morrell, New York Times bestselling author of The Shimmer

"There's a reason why William Kent Krueger is known as a writer's writer. His stories are works of art, literary wonders that beautifully capture a sense of place while they deliver a powerful emotional punch." -- Tess Gerritsen

"Heaven's Keep has it all. A mystery that will have you stumped, a fascinating look at the traditions, folklore, and current-day politics of Native Americans, and a drama that will have you embracing your loved ones at the close of each and every chapter. It is a nail-biting suspense from a writer soon to be on the top of everyone's must-read list." -- Vince Flynn, #1 New York Times bestselling author of Extreme Measures