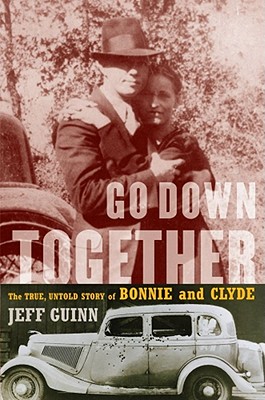 Go Down Together (Hardcover)

The True, Untold Story of Bonnie and Clyde

Forget everything you think you know about Clyde Barrow and Bonnie Parker. Previous books and films, including the brilliant 1967 movie starring Warren Beatty and Faye Dunaway, have emphasized the supposed glamour of America's most notorious criminal couple, thus contributing to ongoing mythology. The real story is completely different -- and far more fascinating.

In Go Down Together: The True, Untold Story of Bonnie and Clyde, bestselling author Jeff Guinn combines exhaustive research with surprising, newly discovered material to tell the real tale of two kids from a filthy Dallas slum who fell in love and then willingly traded their lives for a brief interlude of excitement and, more important, fame. Their timing could not have been better -- the Barrow Gang pulled its first heist in 1932 when most Americans, reeling from the Great Depression, were desperate for escapist entertainment. Thanks to newsreels, true crime magazines, and new-fangled wire services that transmitted scandalous photos of Bonnie smoking a cigar to every newspaper in the nation, the Barrow Gang members almost instantly became household names on a par with Charles Lindbergh, Jack Dempsey, and Babe Ruth. In the minds of the public, they were cool, calculating bandits who robbed banks and killed cops with equal impunity.

Nothing could have been further from the truth. Clyde and Bonnie were perhaps the most inept crooks ever, and their two-year crime spree was as much a reign of error as it was of terror. Lacking the sophistication to plot robberies of big-city banks, the Barrow Gang preyed mostly on small mom-and-pop groceries and service stations. Even at that, they often came up empty-handed and were reduced to breaking into gum machines for meal money. Both were crippled, Clyde from cutting off two of his toes while in prison and Bonnie from a terrible car crash caused by Clyde's reckless driving. Constantly on the run from the law, they lived like animals, camping out in their latest stolen car, bathing in creeks, and dining on cans of cold beans and Vienna sausages. Yet theirs was a genuine love story. Their devotion to each other was as real as their overblown reputation as criminal masterminds was not.

Go Down Together has it all -- true romance, rebellion against authority, bullets flying, cars crashing, and, in the end, a dramatic death at the hands of a celebrity lawman hired to hunt them down. Thanks in great part to surviving Barrow and Parker family members and collectors of criminal memorabilia who provided Jeff Guinn with access to never-before-published material, we finally have the real story of Bonnie and Clyde and their troubled times, delivered with cinematic sweep and unprecedented insight by a masterful storyteller.


Praise For Go Down Together: The True, Untold Story of Bonnie and Clyde…

"Go Down Together casts a brilliant new light, not just on two hapless criminals but on the creation and then the devouring of the first American media darlings. Jeff Guinn is a great storyteller." -- Richard Ben Cramer, author of Joe DiMaggio: The Hero's Life

"Go Down Together is thorough, precise, beautifully written, and compulsively readable. It shines a brilliant lamp on two very unusual people, and, a bonus, it richly illuminates middle America between the wars. Completely fascinating." -- Robert B. Parker, author of the Spenser novels

"This is the best Bonnie and Clyde book I've ever seen. Three-quarters of a century after their deaths, and following a multitude of contradictory accounts by surviving participants, Go Down Together still manages to lift the veil and uncover surprising new stories and details and fresh insights into both the famous outlaw lovers and the team of manhunters who brought them down. An eye-opener that will set historians and crime buffs alike talking for a long time to come." -- Rick Mattix, coauthor of The Complete Public Enemy Almanac

"Guinn cuts through the sex and gunsmoke surrounding the gangster love story of Bonnie and Clyde, and he reveals a couple of kids from the wrong side of the river who were anything but the sharpest gangsters to roam the countryside. His gritty chronicle is a welcome corrective to the affectionate portrait of the couple played by Faye Dunaway and Warren Beatty in Arthur Penn's 1967 movie, Bonnie and Clyde, which told us much more about the rise of the Hollywood antihero than it did about the real-life criminals." -- J. Lynn Lunsford, The Wall Street Journal

"Go Down Together is a rollicking read, an astonishing story of perseverance in the face of hopelessness, and a perverse tale of two lovers whom only death could part.... Jeff Guinn strips away the glamour...to reveal the desperadoes as they really were.... His exhaustively researched chronicle of their misadventures seems definitive." -- Mark Dunkelman, The Providence Journal

"Go Down Together is a richly detailed dual biography.... Guinn, a Texas-based journalist, has researched their lives and times with the kind of thoroughness generally reserved for politicians and captains of industry." -- Allen Barra, The Atlanta Journal-Constitution

"The true story of Bonnie and Clyde.... Intense but fascinating...rubs the gloss from the mythos and replaces it with a patina of true grit.... Guinn succeeds marvelously in re-creating the spirit of the times, the desperation of unemployment and financial ruin. It's a zeitgeist becoming chillingly familiar today, and that gives this book a wallop." -- Jackie Loohauis-Bennett, Milwaukee Journal Sentinel

"Forget what you've heard or read (or seen in the laughable 1967 movie) about a glamorous young couple pulling off brilliant bank robberies, outsmarting and killing their pursuers.... Jeff Guinn relates Bonnie and Clyde's heyday of robbery and killing, their remarkable flight from justice and their grisly ending in such careful detail that you might wonder if he's making it up. He isn't. Go Down Together is the product of remarkable research through letters, diaries, memoirs, police and FBI reports, and interviews with family members. Much of the material has never been made public before." -- Bob Simmons, The Seattle Times

"An embracing biography of the Barrow Gang that draws us in like an old wanted poster.... Not only does Guinn maintain control of the mayhem.... the author manages to humanize the characters...while inserting them into the historical context of the times." -- Steve Bennett, San Antonio Express-News

"This intensely readable account de-romanticizes two of America's most notorious outlaws without undermining the mystique of the Depression-era gunslingers.... With the brisk pacing of a novel, Guinn's richly detailed history will leave readers breathless until the final hail of bullets." -- Publishers Weekly (starred review)