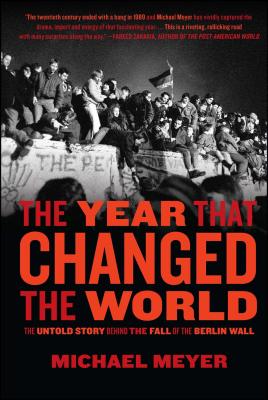 The Year that Changed the World

The Untold Story Behind the Fall of the Berlin Wall

A riveting, eyewitness account of the collapse of communism in Eastern Europe and the end of the Cold War from the Newsweek Bureau Chief in that region at the time.

Twenty years after the fall of the Berlin Wall, many still believe it was the words of President Ronald Regan, “Mr. Gorbachev, tear down this wall!,” that brought the Cold War to an end. Michael Meyer disagrees, and in this extraordinarily compelling account, explains why.

Drawing together breathtakingly vivid, on-the-ground accounts of the rise of Solidarity in Poland, the stealth opening of the Hungarian border, the Velvet Revolution in Prague, and the collapse of the infamous wall in Berlin, Meyer shows how American intransigence contributed little to achieving such world-shaking change. In his reporting from the frontlines of the revolution in Eastern Europe between 1988 and 1992, he interviewed a wide range of local leaders, including Václav Havel and Lech Walesa. Meyer’s descriptions of the way their brave stands were decisive in bringing democracy to Eastern Europe provide a crucial refutation of a misunderstanding of history that has been deliberately employed to help push the United States into the intractable conflicts it faces today.

Michael Meyer is currently  Director of Communications for the United Nations Secretary-General Ban Ki-moon. Between 1988 and 1992, he was Newsweek's Bureau Chief for Germany, Central Europe and the Balkans, writing more than twenty cover stories on the break-up of communist Europe and German unification. He is the winner of two Overseas Press Club Awards and appears regularly as a commentator for MSNBC, CNN, Fox News, C-Span, NPR and other broadcast network. He previously worked at the Washington Post and Congressional Quarterly. He is the author of the Alexander Complex (Times Books, 1989), an examination of the psychology of American empire builders.  He lives in New York City.
Loading...
or support indie stores by buying on