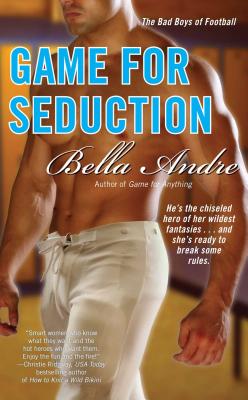 In this sizzling novel from New York Times bestselling author Bella Andre, a pro football star meets his match when he realizes his childhood friend who also happens to be the daughter of his agent has grown up, and then some.

The daughter of a powerful sports agent, Melissa McKnight has harbored lust-filled fantasies for Dominic DiMarco ever since she was an awkward teenager, when the San Francisco Outlaws' gorgeous wide receiver became her father's superstar client. Now Melissa's a beautiful, tenacious associate in her father's firm, and being around to-die-for hard-bodies is all in a day's work...until tangling with Dominic at a photo shoot blindsides her with passion.

Dominic has built a flawless career by being in control—on and off the field. And despite his intense desire for Melissa, he's not about to seduce his agent's daughter—until Melissa stages a power play to break free from her domineering father and winds up at an edgy bar on the wrong side of town. Dominic thinks he's rescuing the innocent Melissa he met years ago...but one night of sizzling passion reveals a woman with no limits—including a penchant for hot sex in public places. If anyone's breaking all the rules of seduction, it's sexy, irresistible Melissa.

But Dominic has a secret from years ago—one that could ruin his sterling reputation and take Melissa along with him. Will his bad-boy past bind them closer together? Or will they crash and burn?

New York Times bestselling author Bella Andre is known for “sensual, empowered stories enveloped in heady romance” (Publishers Weekly). Winner of the Award of Excellence, the Washington Post has called her “one of the top digital writers in America.” Married with two children, Bella splits her time between Northern California and the Adirondacks. You can visit Bella online at BellaAndre.com.
Loading...
or support indie stores by buying on