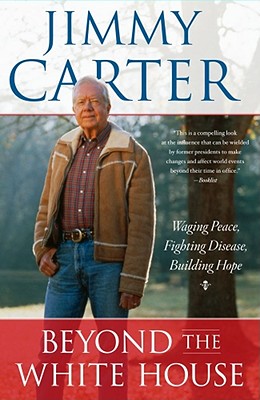 Beyond the White House

The president’s personal and passionate account of his twenty-five years in the service of humanitarian effort that won him the Nobel Peace Prize was received with the admiring respect of reviewers and readers and it will stand as the record of his brilliant post-presidential career.

This is the story of President Jimmy Carter’s post-presidency, the most admired and productive in the nation’s history. Through The Carter Center, which he and Rosalynn Carter founded in 1982, he has fought neglected diseases, waged peace in war zones, and built hope among some of the most forgotten and needy people in the world.

Serving in more than seventy nations, Carter has led peacekeeping efforts for Ethiopia, North Korea, Haiti, Bosnia and Herzegovina, Uganda, and Sudan. With his colleagues from The Carter Center, he has monitored more than sixty-five elections in troubled nations, from Palestine to Indonesia.

Carter’s bold initiatives, undertaken with dedicated colleagues, have eliminated, prevented, or cured an array of diseases that have been characterized as “neglected” by the World Health Organization and that afflict tens of millions of people unnecessarily. The Carter Center has taught millions of African families how to increase the production of food grains, and Rosalynn Carter has led a vigorous war against the stigma of mental illness around the world.

“Immersing ourselves among these deprived and suffering people has been a great blessing as it stretched our minds and hearts,” Jimmy Carter writes. “The principles of The Carter Center have been the same ones that should characterize our nation, or any individual. They are the beliefs inherent in all the great world religions, including commitments to peace, justice, freedom, humility, forgiveness or an attempt to find accommodation with potential foes, generosity, human rights or fair treatment of others, protection of the environment, and the alleviation of suffering. This is our agenda for the future.”

Jimmy Carter was the thirty-ninth President of the United States, serving from 1977 to 1981. In 1982, he and his wife founded The Carter Center, a nonprofit organization dedicated to improving the lives of people around the world. Carter was awarded the Nobel Peace Prize in 2002. He is the author of thirty books, including A Full Life: Reflections at Ninety; A Call to Action: Women, Religion, Violence, and Power; An Hour Before Daylight: Memoirs of a Rural Boyhood; and Our Endangered Values: America’s Moral Crisis.
or
Not Currently Available for Direct Purchase