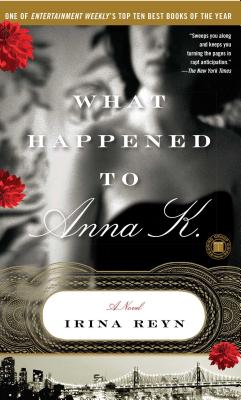 What Happened to Anna K.

“Irina Reyn's contemporary take on Anna Karenina is not a remake or a parody or even an homage, but its own story, twice-told, you might say. Filled like a blintz with references to all things Russian, this fast-paced yet ever-atmospheric tale of love and illusion (and disillusion) has the weight of a novel with things on its mind. You will be happy to entertain this second story.”
— Stephen F. Shapiro, Rainy Day Books, Fairway, KS
View the List

“Irina Reyn's contemporary take on Anna Karenina is not a remake or a parody or even an homage, but its own story, twice-told, you might say. Filled like a blintz with references to all things Russian, this fast-paced yet ever-atmospheric tale of love and illusion (and disillusion) has the weight of a novel with things on its mind. You will be happy to entertain this second story”
— Stephen F. Shapiro, Rainy Day Books, Fairway, KS
View the List

“Literate and fun, What Happened to Anna K. is an uncommonly ambitious book and one of the year’s most amusing reads” (People, People Pick, 4 out of 4 stars).

Now in paperback, this modern-day retelling of one of literature’s greatest novels has been hailed as a mesmerizing literary event, praised across the country for its voice, wisdom, ambition, and sheer storytelling flair. Vivacious thirty-seven-year-old Anna K. is comfortably married to Alex K., an older, prominent businessman in her tight-knit Russian immigrant community in Queens. But a longing for freedom is reignited in this bookish, overly romantic and imperious woman when she meets her beloved cousin Katia’s boyfriend, an outsider and aspiring young writer on whom she pins her hopes for escape. As they begin a reckless affair, Anna launches into a tailspin that alienates her from her husband, family, and entire world. Touching on struggles of identity, fidelity, and community, What Happened to Anna K. is a remarkable re-imagining of the Anna Karenina story brought vividly to life by a “marvelous” (San Francisco Chronicle) young writer.

Praise For What Happened to Anna K.: A Novel…

"Irina Reyn has done the impossible: she has reimagined one of mankind's very best novels, and made it beautifully her own. That she has not diminished Tolstoy but updated him -- freshened him for the strange, sensuous time in which we live -- is as wondrous a feat as I can recall in contemporary fiction." -- Darin Strauss, author of Chang and Eng and The Real McCoy

"This witty, psychologically astute, and immensely pleasurable novel is something of a miracle. By dint of some divine stubbornness, the author has folded the Tolstoyan paradigm of grandeur and regret into our pettier, shallower age, and illuminated both in the process. I know of no recent first novel that has better captured the way we live now, with as assured a sense of comedy and compassion." -- Phillip Lopate, author of Waterfront and Portrait of My Body

"This intricately woven and, frankly, bedazzling novel is more than a retelling of Anna Karenina. It's a laser-sharp portrait of the contemporary Russian-American dream, New York style. Irina Reyn's voice is sophisticated and street smart, and once I became acquainted with her characters I could not put this novel down." -- Frederick Reiken, author of The Odd Sea and The Lost Legends of New Jersey

"What every émigré community deserves is a few fearless, insightful, and penetrating young voices both to announce an arrival and sing an elegy. Irina Reyn is one of those voices, and her first novel is as charming as it is sad, as funny as it is revelatory." -- Tom Bissell, author of God Lives in St. Petersburg and The Father of All Things

"Irina Reyn's sly wit and perfect-pitch dialogue make this modern-day retelling of Anna Karenina a delight to read. Reyn is a cunning writer who knows her subject -- Russian-Jewish immigrants in New York City -- inside out, and casts a skeptical glance at their habits, aspirations, and thwarted destinies. Readers should love this novel, whether or not they know the original Anna." -- Lynne Sharon Schwartz, author of Ruined by Reading and Leaving Brooklyn

"Irina Reyn's debut offers a feisty reimagining of the original tale, with contemporary Russian-Jewish characters in Queens, Manhattan, and Brooklyn brought to vividly detailed life -- and with the conundrums and consolations of immigration itself rendered compassionately and smartly." -- Martha Cooley, author of The Archivist and Thirty-Three Swoons

Irina Reyn is a fiction and nonfiction writer who divides her time between Pittsburgh and Brooklyn. Her work has appeared in anthologies and publications such as The Forward, San Francisco Chronicle, The Moscow Times, Nextbook and Post Road. Born in Moscow, Irina was raised in Fair Lawn, New Jersey.
Loading...
or support indie stores by buying on