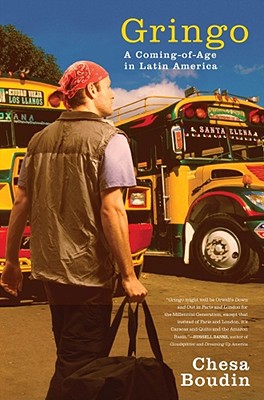 Gringo charts two journeys, both of which began a decade ago. The first is the sweeping transformation of Latin American politics that started with Hugo Chávez's inauguration as president of Venezuela in 1999. In that same year, an eighteen-year-old Chesa Boudin leaves his middle-class Chicago life -- which is punctuated by prison visits to his parents, who were incarcerated when he was fourteen months old for their role in a politically motivated bank truck robbery -- and arrives in Guatemala. He finds a world where disparities of wealth are even more pronounced and where social change is not confined to classroom or dinner-table conversations, but instead takes place in the streets.

While a new generation of progress-ive Latin American leaders rises to power, Boudin crisscrosses twenty-seven countries throughout the Americas. He witnesses the economic crisis in Buenos Aires; works inside Chávez's Miraflores palace in Caracas; watches protestors battling police on September 11, 2001, in Santiago; descends into ancient silver mines in Potosí; and travels steerage on a riverboat along the length of the Amazon. He rarely takes a plane when a fifteen-hour bus ride in the company of unfettered chickens is available.

Including incisive analysis, brilliant reportage, and deep humanity, Boudin's account of this historic period is revelatory. It weaves together the voices of Latin Americans, some rich, most poor, and the endeavors of a young traveler to understand the world around him while coming to terms with his own complicated past. The result is a marvelous mixture of coming-of-age memoir and travelogue.


Praise For Gringo: A Coming of Age in Latin America…