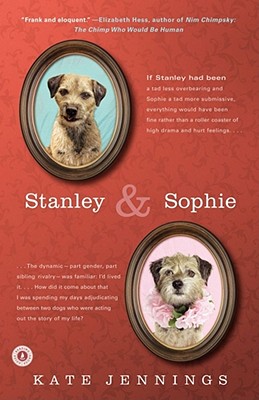 Now in paperback, a wise and moving book about two border terriers and the woman who lost her heart to them. "If Stanley had been a tad less overbearing and Sophie a tad more submissive, everything would have been fine rather than a roller-coaster of high drama and hurt feelings. The dynamic--part gender, part sibling--was familiar: I'd lived it. How did it come about that I was spending my days adjudicat- ing between two dogs who were acting out the story of my life?" Award-winning author Kate Jennings is a fiercely intelligent writer, an astute observer of people and her surround- ings, an irascible Australian with no time for indulgent New Yorkers and their pampered pets, and a recent widow not yet ready to face her grief. Then she meets Stanley, "a tense bundle of muscle and sinew that stood seventeen inches high," and her unexpected love affair began. Swept off her feet and surprised by the depth of her love, Jennings's life is sud- denly overtaken by two border terriers: Stanley, and then a few years later, Sophie. First and foremost, Stanley & Sophie is a book about animals, understanding them, doing the best by them. But it is also a book about the way two rival- rous, demanding, idiosyncratic, exhilarating dogs gave Jennings
daily purpose and showed her the way to her own heart.

Kate Jennings was a student at the University of Sydney in the sixties where she began her career as a poet, essay- ist, and fiction-writer. In 1979 she moved to New York and later became an executive speechwriter for The Wall Street Journal. She has written for Self, Allure, New Woman, and many other magazines. The author of Snake, Women Falling Down in the Street, and Moral Hazard, she lives in New York Cit
Loading...
or support indie stores by buying on