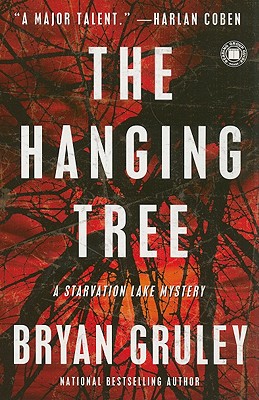 “Gruley does it again in this second Starvation Lake mystery. With his journalist's eye for detail, he transports the reader to small town, hockey-obsessed northern Michigan, where they experience a lifestyle and come to know the inhabitants fully. The characters have even more pull this time around, and the pacing is 'keep-you-up-too-late' perfect! I'm looking forward to installment number three. Go for the hat trick, Bryan!”
— Beth Simpson, Cornerstone Books, Salem, MA
View the List

WHEN GRACIE McBRIDE, the wild girl who had left town eighteen years earlier, is found dead in an apparent suicide shortly after her homecoming, it sends shock waves through her native Starvation Lake. Gus Carpenter, executive editor of the Pine County Pilot, sets out to solve the mystery with the help of his old flame and now girlfriend, Pine County sheriff deputy Darlene Esper. As Gus and Darlene investigate, they can’t help but question if Gracie’s troubled life really ended in suicide or if the suspicious crime-scene evidence adds up to murder.

But in such a small town it’s impossible to be an impartial investigator—Gracie was Gus’s second cousin; Darlene’s best friend; and the lover of Gus’s oldest pal, Soupy Campbell. Yet with all the bad blood between Gus and Gracie over the years, Gus is easily distracted by other problems. His employer is trying to push him out, the locals are annoyed that his stories have halted construction on a new hockey rink, and Darlene’s estranged husband has returned to reclaim his wife.

When Gus tries to retrace Gracie’s steps to discover what happened to her in the eighteen years she was away from Starvation Lake, he’s forced to return to Detroit, the scene of his humiliating past. And though he’s determined to find out what drove Gracie back home, Gus is unprepared for the terrible secrets he uncovers.

The second book in Bryan Gruley’s irresistible Starvation Lake series, The Hanging Tree is a compelling story about family and friendship, sex and violence, and the failure of love to make everything right.

“The Hanging Tree is a terrific story, a dark-hearted mystery entwined in a bullet-fast thriller. Gruley is one of the good ones.” —John Sandford

“The Hanging Tree is an engrossing, sure-footed mystery that manages to be both suspenseful and deeply touching.” —Gillian Flynn, Edgar nominee and New York Times Bestselling Author

“Haunting, observant, and filled with complex characters that will remind you just how much you don't trust your neighbors.  The Hanging Tree will pry its way into your imagination.  And it won't leave." —Brad Meltzer, New York Times bestselling author

“As with ‘Starvation Lake’ before it, ‘The Hanging Tree’ is an exceptionally well-written novel by an author who has mastered the conventions of his genre. Discriminating readers will be anxiously awaiting the third book in this promising series.” —Associated Press

“Gruley captures the hardscrabble life of a recession-rocked small town and the deep interrelations of the inhabitants while delivering complex, intriguing characters caught up in trouble. His take on contemporary journalism is Evelyn Waugh-worthy. Another winner.” —Booklist

“Absorbing. . . Gruley vividly evokes the frigid Michigan winters and the even chillier atmosphere of an insular community determined to keep its secrets.” —Publishers Weekly

“[The Hanging Tree] has it all—suspense, mystery, romance, detection, clear-eyed hometown nostalgia, professional dangers along with the other kind.” —Kirkus Reviews

Bryan Gruley is reporter at large for Bloomberg News and the former Pulitzer Prize-winning Chicago bureau chief of The Wall Street Journal. He has won the Anthony, Barry, and Strand Awards and was nominated for an Edgar Award for best first novel. He lives with his wife in Chicago. Visit BryanGruley.com.
Loading...
or
Not Currently Available for Direct Purchase