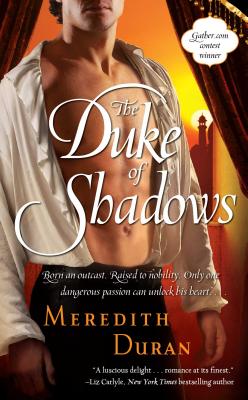 The Duke of Shadows

In a debut romance as passionate and sweeping as the British Empire, Meredith Duran paints a powerful picture of an aristocrat torn between two worlds, an heiress who dares to risk everything...and the love born in fire and darkness that nearly destroys them.

Sick of tragedy, done with rebellion, Emmaline Martin vows to settle quietly into British Indian society. But when the pillars of privilege topple, her fiancé's betrayal leaves Emma no choice. She must turn for help to the one man whom she should not trust, but cannot resist: Julian Sinclair, the dangerous and dazzling heir to the Duke of Auburn.

To the marble halls of London...

In London, they toast Sinclair with champagne. In India, they call him a traitor. Cynical and impatient with both worlds, Julian has never imagined that the place he might belong is in the embrace of a woman with a reluctant laugh and haunted eyes. But in a time of terrible darkness, he and Emma will discover that love itself can be perilous -- and that a single decision can alter one's life forever.

Destiny follows wherever you run.

A lifetime of grief later, in a cold London spring, Emma and Julian must finally confront the truth: no matter how hard one tries to deny it, some pasts cannot be disowned...and some passions never die.