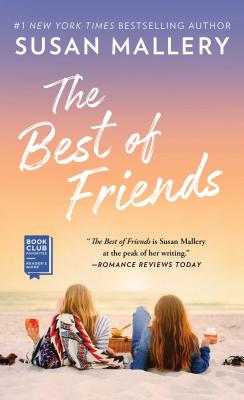 The Best of Friends

In high school, studious Jayne Scott and wild child Rebecca Worden, the famous Worden jewelry heiress, became unlikely best friends—a tie that endured even after Rebecca fled her family to live overseas. After Jayne’s mother passed away, she became part unpaid assistant, part surrogate daughter to the wealthy Wordens. But now, ten years later, Rebecca is coming home to Los Angeles to wreak havoc for the mother who all but rejected her. And Jayne finds herself pulled deeper into the Wordens’ complicated family dynamics—especially when Rebecca’s brother, David, returns as well.

David is the man Jayne always wanted and knew she could never have. But when he gravitates toward her in spite of his mother’s protests, Jayne’s vow to escape the family’s shadow is put to the ultimate test. As lies are shattered and true feelings exposed, Jayne must decide where loyalty ends and love begins....

#1 New York Times bestselling author Susan Mallery writes heartwarming and humorous novels about the relationships that define women’s lives—family, friendship, romance. She’s best known for putting nuanced characters into emotionally complex, real-life situations with twists that surprise readers to laughter. Because Susan is passionate about animal welfare, pets play a big role in her books. Beloved by millions of readers worldwide, her books have been translated into twenty-eight languages.
Loading...
or
Not Currently Available for Direct Purchase