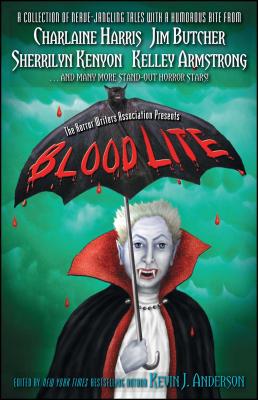 ...a collection of entertaining tales that puts the fun back into dark fiction, with ironic twists and tongue-in-cheek wit to temper the jagged edge.

Charlaine Harris reveals the dark side of going green, when a quartet of die-hard environmentalists hosts a fundraiser with a gory twist in "An Evening with Al Gore"...In an all-new Dresden Files story from Jim Butcher, when it comes to tracking deadly paranormal doings, there's no such thing as a "Day Off" for the Chicago P.D.'s wizard detective, Harry Dresden...Sherrilyn Kenyon turns a cubicle-dwelling MBA with no life into a demon-fighting seraph with one hell of an afterlife in "Where Angels Fear to Tread"...Celebrity necromancer Jaime Vegas is headlining a sold-out séance tour, but behind the scenes, a disgruntled ghost has a bone to pick, in Kelley Armstrong's "The Ungrateful Dead." Plus tales guaranteed to get under your skin -- in a good way -- from

So let the blood flow and laughter reign -- because when it comes to facing our deepest, darkest fears, a little humor goes a long way!

Sherrilyn Kenyon is the #1 New York Times bestselling author of several series, including the Bureau of American Defense novels BAD Attitude, Phantom in the Night, Whispered Lies, and Silent Truth and the Belador series that includes Blood Trinity, Alterant, and The Curse. Since her first book debuted in 1993 while she was still in college, she has placed more than eighty novels on the New York Times list in all formats and genres, including manga and graphic novels, and has more than 70 million books in print worldwide. She lives with her family near Nashville, Tennessee. Visit her website at SherrilynKenyon.com.
Loading...
or
Not Currently Available for Direct Purchase