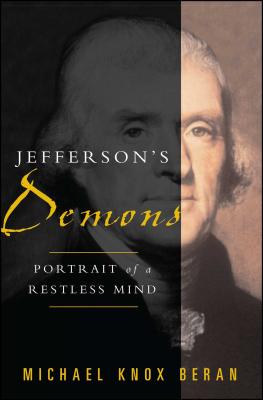 Portrait of a Restless Mind

"I have often wondered for what good end the sensations of Grief could be intended."

Thomas Jefferson suffered during his life from periodic bouts of dejection and despair, shadowed intervals during which he was full of "gloomy forebodings" about what lay ahead.

Not long before he composed the Declaration of Independence, the young Jefferson lay for six weeks in idleness and ill health at Monticello, paralyzed by a mysterious "malady." Similar lapses were to recur during anxious periods in his life, often accompanied by violent headaches. In Jefferson's Demons, Michael Knox Beran illuminates an optimistic man's darker side -- Jefferson as we have rarely seen him before.

The worst of these moments came after his wife died in 1782. But two years later, after being dispatched to Europe, Jefferson recovered nerve and spirit in the salons of Paris, where he fell in love with a beautiful young artist, Maria Cosway. When their affair ended, Jefferson's health again broke down. He set out for the palms and temples of southern Europe, and though he did not know where the therapeutic journey would take him or where it would end, his encounter with the old civilizations of the Mediterranean was transformative. The Greeks and Romans taught him that a man could make productive use of his demons.

Jefferson's immersion in the mystic truths of the Old World gave him insights into mysteries of life and art that Enlightenment philosophy had failed to supply. Beran skillfully shows how Jefferson drew on the esoteric lore he encountered to transform anxiety into action. On his return to America, Jefferson entered the most productive period of his life: He created a new political party, was elected president, and doubled the size of the country. His private labors were no less momentous...among them, the artistry of Monticello and the University of Virginia.

Jefferson's Demons is an elegantly composed account of the strangeness and originality of one Founder's genius. Michael Knox Beran uncovers the maps Jefferson used to find his way out of dejection and to forge a new democratic culture for America. Here is a Jefferson who, with all his failings, remains one of his country's greatest teachers and prophets.

Michael Knox Beran has written for The Wall Street Journal, National Review, and The New Yorker. A graduate of Columbia, Cambridge, and Yale Law School, he is a lawyer and lives in Westchester County, New York, with his wife and daughter.
Loading...
or support indie stores by buying on