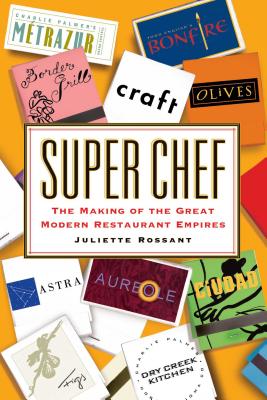 The Making of the Great Modern Restaurant Empires

Wolfgang Puck -- Charlie Palmer -- Todd English -- Mary Sue Milliken and Susan Feniger -- Tom Colicchio: These are men and women who were not content merely to run a great restaurant; they wanted to create multinational food empires. And they did. In Super Chef, veteran journalist Juliette Rossant takes you on an unprecedented tour inside the business of the food business, one of the world's most glamorous -- and little-known -- industries. You catch glimpses of them everywhere: on television, in tabloid gossip columns pictured at glitzy parties with Hollywood stars and power brokers, in national magazine stories about their latest business projects. You buy their products at your local supermarket or online, or maybe even stay at their hotels. Traditional chefs may have stayed in the kitchen and rarely ventured into the public eye, but a growing number of today's top chefs are utilizing skills seldom taught in cooking school -- trading anonymity for celebrity and rising to build culinary empires. Juliette Rossant goes behind the scenes with these new moguls to reveal the key ingredients that go into making a Super Chef. Culinary talent remains the base component, but today's Super Chef must be a whole lot more -- equal parts entrepreneur, realtor, fundraiser, publicist, and media star. In Super Chef, Rossant profiles six of the hottest names in the industry today. From Wolfgang Puck's Spago Beverly Hills to his pizza in your freezer, from Charlie Palmer's Microsoft-powered eWinebook to Todd English on the QM2, from Mary Sue Milliken and Susan Feniger's appearing as the Food Network's Too Hot Tamales to New York's most recent contender Tom Colicchio of both Gramercy Tavern and Craft -- Rossant spins their tales of haute cuisine and corporate conquest. Each of these culinary magnates has taken a unique path to the top, and Rossant adds up the variations in their experiences to offer a gripping and astute look at what it takes to become the cream of the crop. Juliette Rossant knows food, celebrity, and business. She has covered extensively the empire-building celebrity chefs for Forbes, and has been granted unfettered access to her subjects, their staffs, financiers, and families. The result is a rollicking culinary adventure that food lovers, celebrity watchers, and business fans cannot miss.

Juliette Rossant is an author and journalist raised in New York City. After cofounding The Stonefence Review at Dartmouth, she was stationed in Istanbul, Moscow, and Paris, where she wrote as much on food and travel as on business and politics. At Forbes magazine she wrote the Celebrity Chefs column in their annual Celebrity 100 issue as well as the Middle East section of their annual Billionaires List. Now based in Washington, D.C., she is working on her second book as well as consulting to the media and food industries.
Loading...
or support indie stores by buying on