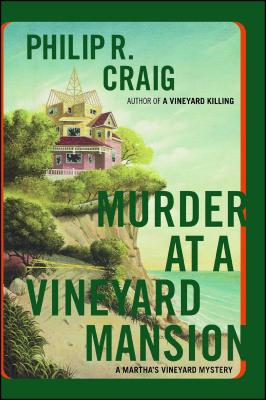 Murder at a Vineyard Mansion

Fresh from his recent acclaim as a Good Morning America Bookclub choice, Philip R. Craig casts his observant eye on the fine line between tragedy and comedy on Martha's Vineyard.

Just look at the Vineyard's criminal du jour, "the Silencer." Loved by many and hated by some, the perp's on a campaign to destroy the audio systems in music-blasting party houses and open-windowed vehicles. Owners of said houses and vehicles feel both fear and hate, while some residents who seek silence silently cheer.

J. W. Jackson, former cop and now a part-time investigator, finds it difficult to get too excited about the Silencer's crimes. J.W.'s a classical music man himself, which may explain his reluctance to take the so-called crimes very seriously.

The fun stops, however, when someone is killed -- a night watchman is thrown over a cliff near an outrageously large new Chappaquiddick mansion.

Who killed Ollie Mattes? Was it the womanizer Harold Hobbes? Harold's mother, Vineyard aristocrat Maud Mayhew, begs J.W. to prove her son's innocence. Harold may have been guilty of vandalism at the mansion, but according to Maud, he's not a killer.

But if Harold didn't kill Ollie, who did? J.W. will soon find himself mired in an intrigue that links some of the Vineyard's most prominent families, families that have known, and sometimes hated, one another for generations. Who is telling the truth? Who will die next?

Meanwhile, at home, J.W.'s under pressure from Zee and the kids to acquire their first computer. Will J.W. ever enter the modern era? It's three against one, so how long can he hold out?

With his usual glorious mix of Vineyard ambience, romance, food, fishing, and first-rate suspense, Craig once again proves that his Martha's Vineyard mysteries are the perfect summer read.

The late Philip R. Craig was the author of nineteen novels in the Martha’s Vineyard Mystery series. A professor emeritus of English at Wheelock College in Boston, he loved the Vineyard and lived there year-round with his wife, Shirley.
Loading...
or support indie stores by buying on