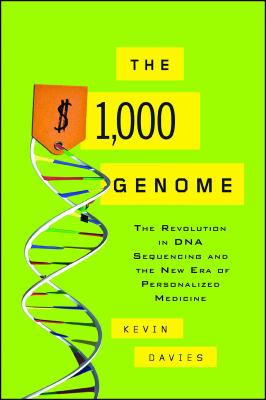 Since the conclusion of the Human Genome Project in 2003, scientists have been racing towards a grand goal: offering individuals a decoding of their complete genetic makeup for just $1,000. As Kevin Davies reveals in this exquisitely reported account, the $1,000 genome will be a reality by 2011 and it will usher in a whole new era of personalized, genomic medicine. Capable of presenting much more advanced information than the current crop of cheek-swab services, the $1,000 complete genome raises some extraordinary possibilities. We will be able to learn if we have genes that predispose us to a host of diseases, and to take a wide range of preventative measures. Drug companies may be able to create versions of drugs tailored specifically to our individual DNA. But we may also face the psychological burden of learning that we have the gene for an incurable disease, such as Parkinson’s.

Acclaimed author Kevin Davies introduces the pioneers of this medical revolution and probes deeply into both the medical benefits and ethical issues of personal genetic testing, also exploring the psychological complexities of learning one’s DNA results, based on both his own experience of being tested and that of a number of others. The $1,000 Genome is an indispensable guide to the new era of personalized medicine.

Kevin Davies, Ph.D., is the author of The $1,000 Genome. His previous book Cracking the Genome was translated into 15 languages. He is currently Editor-in-Chief of Bio•IT World, a trade magazine covering the role of technology in the life sciences. He was the founding editor of Nature Genetics, the world's leading genetics journal, which he headed for its first five years. He has also written for the Times (London), Boston Globe, New England Journal of Medicine, and New Scientist, among others. His first book, Breakthrough (co-authored with Michael White) told the story of the race for the BRCA1 breast cancer gene. Davies holds an M.A. in biochemistry from the University of Oxford and a Ph.D in molecular genetics from the University of London. He held postdoctoral fellowships at MIT and Harvard Medical School before moving into science publishing as an editor with Nature magazine. He lives in Lexington, Massachusetts.
Loading...
or
Not Currently Available for Direct Purchase