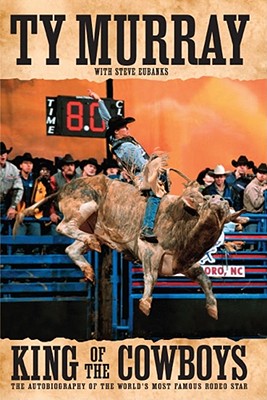 King of the Cowboys

The most famous rodeo champion of all time tells his amazing true story -- and opens a fascinating window into the world of the professional cowboy.

Ty Murray was born to be a rodeo star -- in fact, his first words were "I'm a bull rider." Before he was even out of diapers, he was climbing atop his mother's Singer sewing machine case, which just so happened to be the perfect mechanical bull for a 13-month-old. Before long, Ty was winning peewee events by the hatful, and his special talent was obvious...obvious even to a man called Larry Mahan. At the time the greatest living rodeo legend, six-time champion Mahan invited a teenaged Ty Murray to spend a summer on his ranch learning not just rodeoing but also some life lessons. Those lessons prepared Ty for a career that eventually surpassed even Mahan's own -- Ty's seven All-Around Championships.

In King of the Cowboys, Ty Murray invites us into the daredevil world of rodeo and the life of the cowboy. Along the way, he details a life spent constantly on the road, heading to the next event; the tragic death of his friend and fellow rodeo star Lane Frost; and the years of debilitating injuries that led some to say Ty Murray was finished.

He wasn't. In fact, Ty Murray has brought the world of rodeo into the twenty-first century, through his unparalleled achievements in the ring, through advancing the case for the sport as a television color-commentator, and through the Professional Bull Riders, an organization he helped to build.

In the end, though, Ty Murray is first and foremost a cowboy, and now that he's retired from competition, he takes this chance to reflect on his remarkable life and career. In King of the Cowboys, Ty Murray opens up his world as never before.