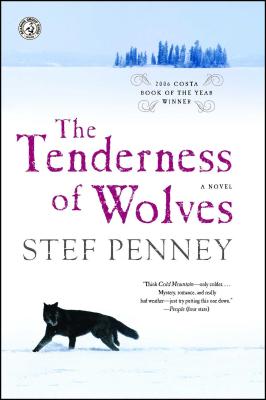 The Tenderness of Wolves

A brilliant and breathtaking debut that captivated readers and garnered critical acclaim in the United Kingdom, The Tenderness of Wolves was long-listed for the Orange Prize in fiction and won the Costa Award (formerly the Whitbread) Book of the Year.

The year is 1867. Winter has just tightened its grip on Dove River, a tiny isolated settlement in the Northern Territory, when a man is brutally murdered. Laurent Jammett had been a voyageur for the Hudson Bay Company before an accident lamed him four years earlier. The same accident afforded him the little parcel of land in Dove River, land that the locals called unlucky due to the untimely death of the previous owner.

A local woman, Mrs. Ross, stumbles upon the crime scene and sees the tracks leading from the dead man's cabin north toward the forest and the tundra beyond. It is Mrs. Ross's knock on the door of the largest house in Caulfield that launches the investigation. Within hours she will regret that knock with a mother's love -- for soon she makes another discovery: her seventeen-year-old son Francis has disappeared and is now considered a prime suspect.

In the wake of such violence, people are drawn to the crime and to the township -- Andrew Knox, Dove River's elder statesman; Thomas Sturrock, a wily American itinerant trader; Donald Moody, the clumsy young Company representative; William Parker, a half-breed Native American and trapper who was briefly detained for Jammett's murder before becoming Mrs. Ross's guide. But the question remains: do these men want to solve the crime or exploit it?

One by one, the searchers set out from Dove River following the tracks across a desolate landscape -- home to only wild animals, madmen, and fugitives -- variously seeking a murderer, a son, two sisters missing for seventeen years, and a forgotten Native American culture before the snows settle and cover the tracks of the past for good.

In an astonishingly assured debut, Stef Penney deftly weaves adventure, suspense, revelation, and humor into an exhilarating thriller; a panoramic historical romance; a gripping murder mystery; and, ultimately, with the sheer scope and quality of her storytelling, an epic for the ages.

Praise For The Tenderness of Wolves: A Novel…

"The Tenderness of Wolves stood out from a very strong shortlist. We felt enveloped by the snowy landscape and gripped by the beautiful writing and effortless story-telling. It is a story of love, suspense and beauty. We couldn't put it down." -- Costa Award Committee

"An original and readable mixture of mystery and history, with a good dollop of old-fashioned adventure." -- The Times (London)

"In suitable Jack London style for a setting in Canada's snowy wastes, wolves wander in and out of this suspenseful 19th-century epic, offering a leitmotif of constant unease. So begins what masquerades as a traditional murder quiz but quickly broadens out to encompass other lines of inquiry -- the mystery of two long-missing young sisters, the quest for a forgotten native American culture, the twists and turns of an unusual love story. Stef Penney is from Edinburgh and claims never to have visited Canada -- impressive, then, that the land of her imagination convinces." -- The Guardian

"A fascinating, suspense-filled adventure, a refreshing contrast to the conventional murder mystery." -- The Sunday Telegraph (London)

"The novel has a large canvas and . . . the story twists and turns. The Tenderness of Wolves is an entertaining and well-written adventure thriller." -- The Spectator

"Stef Penney, who in an even more unusual coup, won the first novel prize with a murder saga, The Tenderness of Wolves. The (Costa) judges said it made them feel "enveloped in the snowy wastes" of Canada in 1867. Penney, agoraphobic at the time, did all her research in the British Library." -- The Guardian (Manchester)

"An entertaining, well-constructed mystery . . . sexy, suspenseful, densely plotted storytelling . . . a novel with far greater ambitions than your average thriller, combining as it does the themes of Conrad's Heart of Darkness with Atwood's Survival, and lashing them to a story that morphs Ian Rankin with The Mad Trapper of Rat River." -- The Globe and Mail (Canada)

"A quite remarkable debut novel set in the snowy backwoods of Canada in 1867 . . . atmospheric and delicately written mystery." -- Birmingham Post

"Confident and complex portrait of 1860s Ontario. . . . Between twists and turns of plot, Penney evokes the land -- its shades of light and changes of weather, its marshes and treacherous waters. Rarely has winter seemed so febrile. . . . This one is a powerhouse." -- Books of Canada

"Penney's descriptions of the harsh landscape and the deprivation of living there are vivid and excellent." -- The Daily Telegraph (Australia)

Stef Penney was born and grew up in Edinburgh. After earning a degree in philosophy and theology from Bristol University, she turned to filmmaking, studying film and TV at Bournemouth College of Art. On graduation she was selected for the Carlton Television New Writers Scheme. She is a screenwriter. The Tenderness of Wolves is her first novel.
Loading...
or support indie stores by buying on