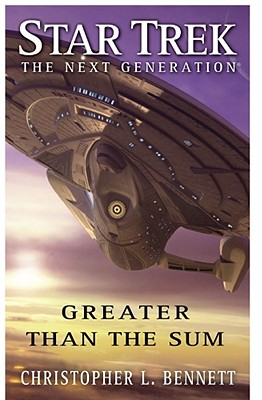 The Next Generation: Greater than the Sum

The Starship Rhea has discovered a cluster of carbon planets that seems to be the source of the quantum energies rippling through a section of space. A landing party finds unusual life-forms inhabiting one of the planets. One officer, Lieutenant T'Ryssa Chen -- a half-Vulcan -- makes a tenuous connection with them. But before any progress can be made, the Rhea comes under attack from the Einstein -- a Starfleet vessel now controlled by the Borg. The landing party can only listen in horror as their comrades are assimilated. The Borg descend to the planet, and just as Chen accepts that she will be assimilated, the lieutenant is whisked two thousand light-years away.

A quantum slipstream -- instantaneous transportation -- is controlled by these beings in the cluster, and in the heart of the cluster there is now a Borg ship. Cut off from the rest of the Borg collective, the Einstein cannot be allowed to rejoin it. For the sake of humanity, the Borg cannot gain access to quantum slipstream technology.

Starfleet Command gives Captain Picard carte blanche: do whatever he must to help the beings in the cluster, and stop the Einstein no matter the cost.