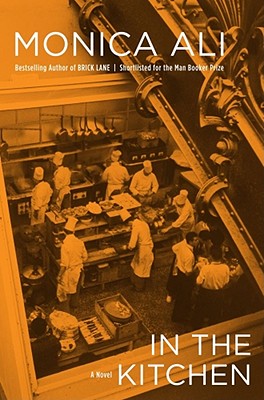 In the Kitchen (Hardcover)

From the award-winning, critically acclaimed, and bestselling author of Brick Lane, her long-awaited second novel, a stunning story about a man in crisis.

Just as she did inBrick Lane, Monica Ali again brings read- ers into a rich and fascinating London subculture, this time the intoxicating world of chefs and kitchen denizen from every culture and class in London.

Surrounded by the fading glory of the Imperial Hotel, embattled Executive Chef Gabriel Lightfoot tries to maintain his culinary integrity in the hotel’s restaurant, while manag- ing an unruly but talented group of immigrant cooks. His goal is to please the management of the hotel, and to move on to ownership of his own place. But when the dead body of a Ukrainian porter is discovered in the restaurant cellar, the tenuous balance in Gabe’s life begins to shift. Adding to his stress, Gabe’s father is diagnosed with cancer, his girlfriend starts talking about a new level in their relationship, and the investors in his new business are monitoring his every move. Enter Lena, an eerily attractive young woman mysteriously tied to the death of the porter. Under her spell, Gabe makes a decision the consequences of which irrevocably change the course of the life he knows—and the future he thought he wanted.

Ali, named one of the twenty best young British writers by Granta, was nominated for the Booker and Los Angeles Times book prizes and the National Book Critics Circle Award. She has written an absolutely extraordinary novel that will delight readers of Brick Lane and further establish her as one of Britain’s most talented and original voices.