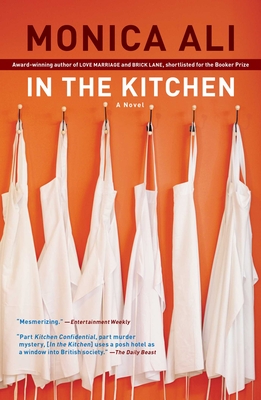 Monica Ali, nominated for the Man Booker Prize, the Los Angeles Times Book Prize, and the National Book Critics Circle Award, has written a follow-up to Brick Lane that further establishes her as one of England’s most compelling and original voices.

Gabriel Lightfoot, an enterprising man from a northern English mill town, is making good in London. As executive chef at the once-splendid Imperial Hotel, he aims to run a tight kitchen. Though he’s under constant challenge from the competing demands of an exuberantly multinational staff, a gimlet-eyed hotel management, and business partners with whom he is secretly planning a move to a restaurant of his own, all Gabe’s hard work looks set to pay off.

Until, that is, a worker is found dead in the kitchen’s basement. It is a small death, a lonely death—but it is enough to disturb the tenuous balance of Gabe’s life.

Enter Lena, an eerily attractive young woman with mysterious ties to the dead man. Under her spell, Gabe makes a decision, the consequences of which strip him naked and change the course of the life he knows—and the future he thought he wanted.

With prose that "crackles with verve and vivacity" (Milwaukee Journal Sentinel) and "a truly Dickensian cast of characters" (The Buffalo News), Ali’s "portrait of a middle-aged Holden Caulfield wandering the streets" (The Plain Dealer) is a sheer pleasure to read.

Praise For In the Kitchen: A Novel…

“All the ingredients for a sizzling tale are present: A sudden death that may or may not be accidental. A middle-age chef on the verge of a breakdown. Sexual obsession. An illicit affair. A nefarious plot involving human smuggling.”—Thrity Umrigar, Boston Globe

“The kitchen scenes are superb…. and the dialogue crackles with authenticity…. [A] serious and intelligent take on the hidden world of Britain's illegal immigrants.”—Conan Putnam, Chicago Tribune

"What pungency in her prose, what immediacy… You cannot help admiring the power of this writer…. Unforgettable.”—Martin Rubin, Washington Times

"Ali gets the kitchen just right and Gabriel is a sympathetic and beautifully realized character."--Time

"Remarkable... A meditation on free will and what it means to be a human being trying to control one's life."--Columbus Dispatch

"Ali is an expert at detailing the immigrant experience in London... Ali possesses great powers of lyricism and insight."--Christian Science Monitor

"Ali writes with wit and sympathy about the many twists and turns that define our lives."--Milwaukee Journal-Sentinel