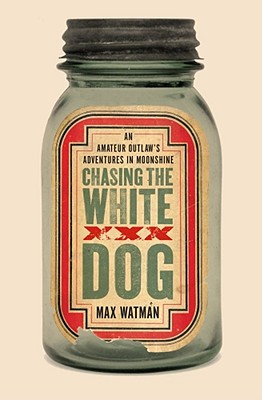 In Chasing the White Dog, journalist Max Watman traces the historical roots and contemporary story of hooch. He takes us to the backwoods of Appalachia and the gritty nip joints of Philadelphia, from a federal courthouse to Pocono Speedway, profiling the colorful characters who make up white whiskey's lore. Along the way, Watman chronicles his hilarious attempts to distill his own moonshine -- the essential ingredients and the many ways it can all go wrong -- from his initial ill-fated batch to his first successful jar of 'shine.

It begins in Monongahela, Pennsylvania, where drunk and armed outlaws gathered in the summer of 1794. George Washington mustered 13,000 troops to quell the rebellion, but by the time they arrived, the rebels had vanished; America's first moonshiners had packed up their stills and moved on.

From these moonshiners who protested the Whiskey Tax of 1791, to the bathtub gin runners of the 1920s, to today's booming bootleg businessmen, white lightning has played a surprisingly large role in American history. It touched the election of Thomas Jefferson, the invention of the IRS, and the origins of NASCAR. It is a story of tommy guns, hot rods, and shot houses, and the story is far from over.

Infiltrating every aspect of small-scale distilling in America, from the backyard hobbyists to the growing popularity of microdistilleries, Chasing the White Dog provides a fascinating, centuries-long history of illicit booze from an unrepentant lover of moonshine.