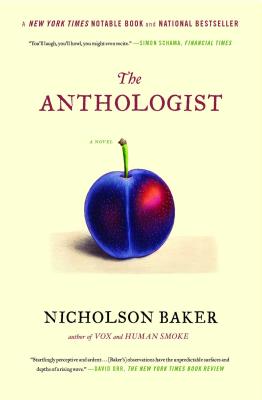 Paul Chowder is trying to write the introduction to a new anthology of rhyming verse, but he’s having a hard time getting started. The result of his fitful struggles is The Anthologist, Nicholson Baker’s brilliantly funny and exquisite love story about poetry.


Praise For The Anthologist: A Novel…

"[The Anthologist is] startlingly perceptive and ardent...Chowder is possibly the most appealing narrator Baker has invented....You don't have to agree with these opinions; you just savor the tartness of a raw take....Baker is a beautiful writer, and bracing reader of poetry...[a] tremendous success....We read poems because they have a knack for mattering. And how pleasing it is to be so gently, so poetically reminded of that." -- David Orr, The New York Times Book Review

"[A] light, funny, deeply literary hybrid that functions both as a novel...and a lip-smacking Bakersian treatise on the joys of poetry." -- Sam Anderson, New York magazine

"Mr. Baker...slips effortlessly into the eager, friendless voice of a man who is every bit as glamorous and dynamic as his name suggests....funny, self-deprecating...delivers unexpectedly illuminating thoughts....But the real beauty of The Anthologist lies in what Paul does not overtly say....enjoy this book's intensity. Don't break its spell." -- Janet Maslin, The New York Times

"The Anthologist is a slyly intelligent rant about the crazy paradoxes of artistic careerism, and a casual and hilarious series of lessons on poetry...Baker's comic brio and high-energy pace make [Chowder's] lurching progress a winning pleasure." -- Mark Doty, O, the Oprah Magazine

"Baker's best novel to date... You'll laugh, you'll howl, you might even recite. You will learn useful stuff...Chowder is not just one of Baker's great inventions. ...[he] is instantly unforgettable, one of the most concretely realised voices in modern American fiction...Luminous with wisdom both instinctive and learned and...improbably wise. ... every so often the culture produces a writer such as Nicholson Baker, whose every page and every line is inked with a wicked yen for the mischief of lingo." -- Simon Schama, Financial Times (London)

"[A] novel inside a novel, a life within a life....Baker is a hybrid of past and future. His style has a meditative echo, like a man in a cave walking toward a light on the other end....On paper, in his essays and his fiction, he knows exactly where he is." -- Susan Reynolds, Los Angeles Times

"[The] wonderful new novel The Anthologist...offers something different and (after all the books that have been written about tortured artists) better...The drama and emotion in The Anthologist builds subtly. You become so engaged by Chowder's narrative voice, and his engrossing musings about poetry, that his loneliness and his valiant attempts to cope with despair creep up on you. When they do, you're moved by this sincere, funny, sad man." -- Ken Tucker, Entertainment Weekly

"The happiest felicity in a book full of them is that such a loving and superbly witty homage to poetry -- and to life -- could have been achieved only through the prose sentences of Nicholson Baker." -- William H. Pritchard, The Boston Globe

"In the brisk and entertaining The Anthologist, Nicholson Baker...writes a completely successful novel about poetry....The book is constantly appealing in its witty approach to its ostensible subject -- the charms, rewards and continuing values of poetry....The Anthologist is pure pleasure -- it takes unbridled joy in the love of poetry. It will send readers back to beloved poems or make them search out new ones....provocative fiction." -- Robert Allen Papinchak, The Seattle Times

"We come to see that Baker has written, here as elsewhere, a book of associations...in which he celebrates the superfluous details of life....He is an expert craftsman...[The Anthologist] is a testament to -- indeed an anthology of -- moments when poetry and life touch against each other....[Baker's work] is a rare example of affectionate art, of brilliant writing that manages to collect and display the odds and ends of existence in a way that makes the reader like it and him." -- Stephen Abell, The Times Literary Supplement (London)

Nicholson Baker is the author of nine novels and four works of nonfiction, including Double Fold, which won a National Book Critics Circle Award, and House of Holes, a New York Times Notable Book of the Year. His work has appeared in The New Yorker, Harper’s, and The New York Review of Books. He lives in Maine with his family.
Loading...
or
Not Currently Available for Direct Purchase