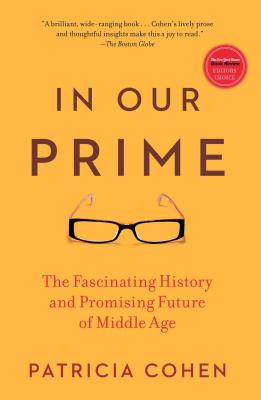 In Our Prime (Paperback)

The Fascinating History and Promising Future of Middle Age

Now in paperback from New York Times reporter Patricia Cohen, a “lively, well-researched chronicle” (The New York Times Book Review) of the concept of middle age, from the nineteenth century to the present.

The director behind the Hollywood close-up and the inventor of the “midlife crisis,” the doctors who promised to restore men’s sexual vigor with monkey gland transplants and the neuroscientists mapping the middle-aged brain, the fashion designers and the feminists: They are all part of the fascinating parade of businessmen, entertainers, scientists, and hucksters who have shaped our understanding and experience of middle age.

Midlife has swung between serving as a symbol of power and influence and a metaphor for decline, yet the invention and history of this vital period of life have never before been fully told. Acclaimed New York Times reporter Patricia Cohen finally fills the gap with a book that provokes surprise, outrage, and delight. In Our Prime takes readers from turn-of-the-century factories that refused to hire middle-aged men to high-tech laboratories where researchers are unraveling the secrets of the middle-aged mind and body. She traces how midlife has been depicted in film, television, advertisements, and literature. Cohen exposes the myths of the midlife crisis and empty-nest syndrome and investigates antiaging treatments such as human growth hormones, estrogen, Viagra, Botox, and plastic surgery.

Exhilarating and empowering, In Our Prime will compel readers to reexamine a topic they think they already know.

Patricia Cohen has been a New York Times reporter for thirteen years. She has also worked at The Washington Post, New York Newsday, and Rolling Stone. She has a BA from Cornell University and a graduate degree from the Woodrow Wilson School at Princeton University.

Praise For In Our Prime: The Fascinating History and Promising Future of Middle Age…