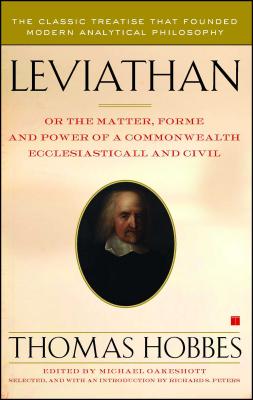 Or the Matter, Forme, and Power of a Commonwealth Ecclesiasticall and Civil

A cornerstone of modern western philosophy, addressing the role of man in government, society and religion

In 1651, Hobbes published his work about the relationship between the government and the individual. More than four centuries old, this brilliant yet ruthless book analyzes not only the bases of government but also physical nature and the roles of man.

Comparable to Plato's Republic in depth and insight, Leviathan includes two society-changing phenomena that Plato didn't dare to dream of -- the rise of great nation-states with their claims to absolute sovereignty, and modern science, with its unprecedented analytic power. To Hobbes, the leviathan -- a mythical sea creature described in the Old Testament -- represented his central thesis: that the state must be strong in order to control and protect its citizens. Even today, Hobbes's thesis in Leviathan is debated among scholars and philosophy aficionados around the globe.

One of the earliest attempts at a genuinely scientific understanding of politics and society in their modern form, this book also remains one of the most stimulating. In his timeless work, Hobbes outlines his ideas about the passions and the conduct of man, and how his theories are realized in every individual. Addressing free will and religion, Hobbes constructs an intelligent argument for the basis of religion within government and how to organize a peaceful and successful Christian commonwealth.

Like Plato's Republic, this book contains ideas on psychology, ethics, law, language, and religion that continue to challenge modern thinkers and exercise a profound influence on Western thought. A classic treatise of philosophy, Leviathan is critical reading for anyone who wishes to examine the human mind through the prisms of government and society.

Thomas Hobbes (1588-1679) was one of the founding fathers of modern philosophy. An Englishman, Hobbes was heavily influenced by his country's civil war and wrote his preeminent work, Leviathan, about the relationship between the individual and the government during that period. Hobbes was a scholar, phauthoilosopher, and the author of several works on political and religious philosophy.
Loading...
or support indie stores by buying on