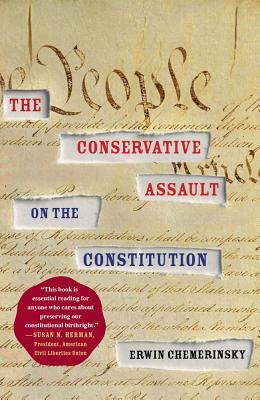 The Conservative Assault on the Constitution (Paperback)

Over the last few decades, the Supreme Court and the federal appellate courts have undergone a dramatic shift to the right, the result of a determined effort by right-wing lawmakers and presidents to reinterpret the Constitution by reshaping the judiciary. Conservative activist justices have narrowed the scope of the Constitution, denying its protections to millions of Americans, exactly as the lawmakers who appointed and confirmed these jurists intended. Basic long-standing principles of constitutional law have been overturned by the Rehnquist and Roberts courts. As distinguished law professor and constitutional expert Erwin Chemerinsky demonstrates in this invaluable book, these changes affect the lives of every American. As a result of political pressure from conservatives and a series of Supreme Court decisions, our public schools are increasingly separate and unequal, to the great disadvantage of poor and minority students. Right-wing politicians and justices are dismantling the wall separating church and state, allowing ever greater government support for religion. With the blessing of the Supreme Court, absurdly harsh sentences are being handed down to criminal defendants, such as life sentences for shoplifting and other petty offenses. Even in death penalty cases, defendants are being denied the right to competent counsel at trial, and as a result innocent people have been convicted and sentenced to death. Right-wing politicians complain that government is too big and intrusive while at the same time they are only too happy to insert the government into the most intimate aspects of the private lives of citizens when doing so conforms to conservative morality. Conservative activist judges say that the Constitution gives people an inherent right to own firearms but not to make their own medical decisions. In some states it is easier to buy an assault rifle than to obtain an abortion. Nowhere has the conservative assault on the Constitution been more visible or more successful than in redefining the role of the president. From Richard Nixon to George W. Bush, conservatives have sought to significantly increase presidential power. The result in recent years has been unprecedented abuses, including indefinite detentions, illegal surveillance, and torture of innocent people. Finally, access to the courts is being restricted by new rulings that deny legal protections to ordinary Americans. Fewer lawsuits alleging discrimination in employment are heard; fewer people are able to sue corporations or governments for injuries they have suffered; and even when these cases do go to trial, new restrictions limit damages that plaintiffs can collect. The first step in reclaiming the protections of the Constitution, says Chemerinsky, is to recognize that right-wing justices are imposing their personal prejudices, not making neutral decisions about the scope of the Constitution, as they claim, or following the "original meaning" of the Constitution. Only then do we stand a chance of reclaiming our constitutional liberties from a rigid ideological campaign that has transformed our courts and our laws. Only then can we return to a constitutional law that advances freedom and equality.

Praise For The Conservative Assault on the Constitution…

“Admirably lucid. . . . Chemerinsky's book is a welcome dose of real history, clear thought and genuine respect for the rule of law as a humane covenant."