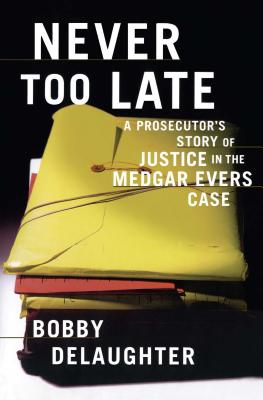 A Prosecutor's Story of Justice in the Medgar Evars Case

In June 12, 1963, Mississippi's fast-rising NAACP leader Medgar Evers was gunned down by a white supremacist named Byron De La Beckwith. Beckwith escaped conviction twice at the hands of all-white Southern juries, and his crime went unpunished for more than three decades. Now, from Bobby DeLaughter, one of the most celebrated prosecutors in modern American law, comes the blistering account of his remarkable crusade in 1994 finally to bring the assassin of Medgar Evers to justice.

This is the fascinating, real-life story of the assistant district attorney -- played by Alec Baldwin in Rob Reiner's Ghosts of Mississippi -- who brought closure to one of the darkest chapters of the civil rights movement.

When the district attorney's office in Jackson, Mississippi, decided to reopen the case, the obstacles in its way were overwhelming: missing court records; transcripts that were more than thirty years old; original evidence that had been lost; new testimony that had to be taken regarding long-ago events; and the perception throughout the state that a reprosecution was a futile endeavor. But step by painstaking step, DeLaughter and his team overcame the obstacles and built their case.

With taut prose that reads like a great detective thriller, Never Too Late is a page-turner of the very highest order. It charts the course of a country lawyer who, concerned about the collective soul of his community and the nature of American justice in general, dared to revisit a thirty-one-year-old case -- one so incendiary that everyone warned him not to touch it -- and win a long-overdue conviction. DeLaughter's success in this trial stands today as a landmark in the annals of criminal prosecution, and this bracing first-person account brings the saga to life as never before.

Bobby DeLaughter is a judge in the Hinds County Court, Jackson, Mississippi. A former district attorney and a past president of the Mississippi Prosecutor's Association, he is a graduate of the FBI's National Law Institute and lives in Terry, Mississippi. His brilliant conclusion in this case was included in the volume Ladies and Gentlemen of the Jury: Greatest Closing Arguments in Modern Law.
Loading...
or support indie stores by buying on