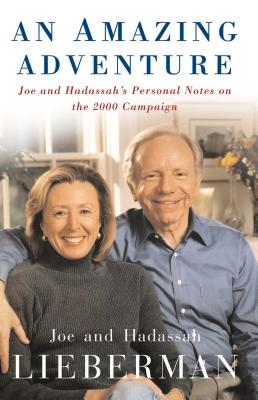 Joe and Hadassah's Personal Notes on the 2000 Campaign

An Amazing Adventure is a groundbreaking memoir, the personal recollections of Senator Joe Lieberman and his wife, Hadassah, of their 2000 vice presidential campaign. There has never been such a frank account of the American way of running for national office. The Liebermans' voices alternate throughout the book as they describe the excitement, their sense of the honor of being chosen, the extraordinary and sometimes exhausting demands, and the satisfactions and joys of the hard-fought campaign they waged as a team.

From the second they find out that Joe has been chosen by Al Gore as his running mate, the Liebermans' lives are drastically changed -- privacy vanishes as political handlers take over. Joe and Hadassah recount the excruciating vetting process, the exhilaration of the Democratic National Convention, the tension of the debates, and finally, the drama of Election Day and of the contentious weeks that followed.

Thrilled to be running in a national campaign that they regarded as immensely important to the national purpose, and profoundly moved by the audiences that came to see and hear them, the Liebermans nevertheless admit that it was a complicated and demanding experience. They describe its ups and downs in personal, frank, and witty ways.

Woven throughout this inspirational but cautionary tale are the Liebermans' opinions, including their take on Joe's being the first Jewish vice presidential candidate and on Hadassah's debut to a national public as a first-generation American and child of Holocaust survivors.

An honest, high-spirited, revealing, and ultimately optimistic book from the candidate and his wife.

Joe Lieberman is a United States senator representing Connecticut. As the 2000 Democratic vice presidential candidate, he became the first Jew in American history to run for national office on a major-party ticket. With close ties and a wide fan base among Evangelical Christians, a popular speaker at churches and conferences, Lieberman counts top Evangelical leaders including Pastor John Hagee, Joyce Meyer, and Rick Warren as his friends and supporters.

Senator Lieberman lives in Stamford and Washington with his wife Hadassah. Together they are the proud parents of four children—Matthew, Rebecca, Ethan and Hana—four granddaughters, Tennessee, Willie, Eden and Madeleine, and a grandson, Yitzhak.