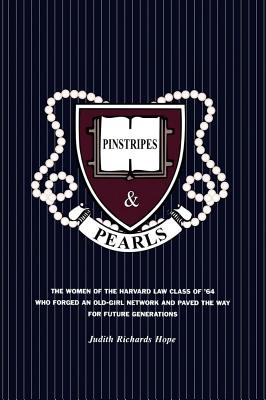 " W]e didn't fully understand what we were getting into -- what obstacles we would encounter, what trails we would blaze....We just knew, from an early age, that we wanted both to serve our country, help make our world a little better and a little safer -- just like our fathers and our brothers -- and to marry; rear honest, happy children; and lead fulfilling personal lives -- just like our mothers."

To illustrate the challenges facing women of her generation, author Judith Richards Hope describes the lives and careers of a handful of barrier-breaking women, including herself, from Harvard Law School's pivotal class of 1964, who fought and overcame preconceptions and prejudices against their entering what, at the time, was a male vocation. Despite their struggles in law school and in the workplace, they maintained their ambition and ultimately achieved remarkable success. They look back on law school as a time of enormous personal and intellectual growth.

In 1961, before modern civil rights legislation and women's liberation, women were generally regarded as undesirable candidates for law studies. Most law firms believed that women couldn't keep up the pace, that they couldn't avoid emotional outbursts, and that their place was in the home. Nonetheless, 48 women applied to Harvard Law that year, 22 were accepted, and 15 graduated in a class of 513. The rigorous training at Harvard Law taught these women to survive and to thrive in one of the toughest, most competitive professions in the country. It took grit, confidence, resourcefulness, thick skins, and a certain irreverence for them to succeed. These qualities propelled Judith Richards Hope and her classmates into some of the most prominent careers of their generation, yet they did not sacrifice their more traditional female roles. Their achievements have helped pave the way for women of subsequent generations.

Pinstripes & Pearls illuminates the extraordinary trajectories of these women -- among them Pat Schroeder, Judith W. Rogers, and Hope herself -- who forged an old-girl network and became lifelong friends. Through compelling and often witty anecdotes, unprecedented archival research of Harvard records, and revealing testaments to the difficulties faced by women harboring serious career goals, Pinstripes & Pearls personifies in these women the emergence of a new type of American female, one whose "goal is to reach the destination, not just to avoid humiliation on the way.

Judith Richards Hope became the first female associate director of the White House Domestic Council in 1975. In 1981, she cofounded the Washington office of the Paul, Hastings law firm, where she still practices. She was the firm's first female partner and the first female executive committee member. In 1988, she was the first woman elected to the Union Pacific board. In 1989, she became the first woman named to the Harvard Corporation, the university's senior governing board. Currently, she is on the board of the Thyssen-Krupp Budd Company, General Mills, Inc., Russell Reynolds Associates, Inc., and Union Pacific Corporation. Ms. Hope has taught law at Pepperdine, Georgetown, the University of Richmond, and Harvard. She lives in Washington, D.C., and Rappahannock County, Virginia.
Loading...
or support indie stores by buying on