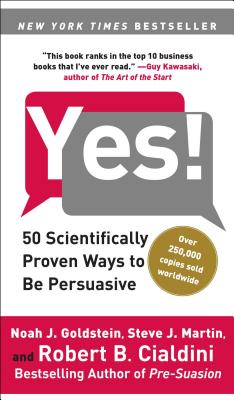 50 Scientifically Proven Ways to Be Persuasive

Learn how small changes can make a big difference in your powers of persuasion with this New York Times bestselling introduction to fifty scientifically proven techniques for increasing your persuasive powers in business and life.

Every day we face the challenge of persuading others to do what we want. But what makes people say yes to our requests? Persuasion is not only an art, it is also a science, and researchers who study it have uncovered a series of hidden rules for moving people in your direction. Based on more than sixty years of research into the psychology of persuasion, Yes! reveals fifty simple but remarkably effective strategies that will make you much more persuasive at work and in your personal life, too.

Cowritten by the world’s most quoted expert on influence, Professor Robert Cialdini, Yes! presents dozens of surprising discoveries from the science of persuasion in short, enjoyable, and insightful chapters that you can apply immediately to become a more effective persuader.

Often counterintuitive, the findings presented in Yes! will steer you away from common pitfalls while empowering you with little known but proven wisdom.

Whether you are in advertising, marketing, management, on sales, or just curious about how to be more influential in everyday life, Yes! shows how making small, scientifically proven changes to your approach can have a dramatic effect on your persuasive powers.

Noah Goldstein is a protege of Cialdini's.  He is an assistant professor at the University of Chicago Graduate School of Business.  He earned a Ph.D. in psychology under Robert Cialdini at Arizona State University in 2007, and he has published research with Cialdini in the Journal of Personality and Social Psychology.

Steve Martin is the UK-based co-director of Influence at Work.  Prior to joining with Robert Cialdini's consulting group, he held a number of positions in sales, marketing, and management at several blue-chip companies.

Robert Cialdini is recognized worldwide for his inspired field research on the psychology of influence. He is a New York Times bestselling author. His books, including Influence, have sold more than three million copies in thirty-three languages. Dr. Cialdini is Regents’ Professor Emeritus of Psychology and Marketing at Arizona State University and the president and CEO of Influence at Work, an international company that provides keynotes and influence training on how to use the lessons in Dr. Cialdini’s books ethically and effectively.
Loading...
or support indie stores by buying on