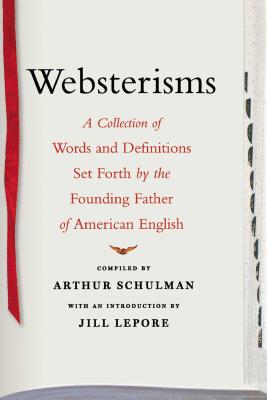 "A national language is a national tie, and what country wants it more than America?"
-- Noah Webster

What makes American English American? In 1800, irascible patriot Noah Webster set out to answer this question by tirelessly recording the vocabulary of a novel breed -- the American citizen. Though he was a political conservative, his American Dictionary of the English Language was born out of his deeply held and profoundly democratic conviction that language was by and for the people. A word's popularity, no matter how lowly its origins, was its criterion for inclusion. Webster's original American dictionary, the granddaddy of them all, helped define the American character.

In a light-footed introductory essay, Harvard historian and New Yorker contributor Jill Lepore brilliantly revives the curmudgeonly Webster: his rigor, his passion for words, and his paradoxical ideas about language and politics. Arthur Schulman, longtime crossword puzzle creator for The New York Times, has culled fifteen hundred of Webster's entries from the original book, revealing Webster's interpretive powers as well as his pervasive moralism. Incisively annotated and delightfully illustrated with quotes from contemporary American sources, these excerpts paint a fascinating picture of a budding Republic.

For everyone who's ever gone to "look it up in Webster's" Websterisms offers a crisp new view both of the man justifiably called the Founding Father of American English and of his magnum opus. It took Webster twenty-eight years to compile and publish his monumental work, during which time he was much mocked: what could American English be but a perversion of the King's English? But his dictionary stuck, and its influence grew and grew. We still use most of the words Webster defined, like spank and caucus. Others, like musquash, haven't fared as well. Websterisms tells the tale of a language that once was and that lives on.

Praise For Websterisms: A Collection of Words and Definitions Set Forth by the Founding Father of American English…

"Who reads a dictionary for pleasure? Websterisms will revise your prejudices. The introductory essay by the distinguished historian Jill Lepore entitled 'A Nue Merrykin Dikshunary' is an authoritative, highly amusing account of the crusty character who did the most to fix our American language. Equally engaging is the analysis of Webster's crotchets by Arthur Schulman, a professor of psychology who is also a world-class lexiphile and maker of crossword puzzles, who has introduced, edited, and annotated the most interesting of the great man's definitions. Highly recommended!" -- E. D. Hirsch, author of Cultural Literacy

"Lepore and Schulman serve up 1,500 strange, intriguing, and wonderful reasons why Noah Webster was the man who put American dictionaries on the map." -- Jack Lynch, author of Samuel Johnson's Dictionary: Selections from the 1755 Work That Defined the English Language

"Revolutionary and lawmaker both, Noah Webster wrote the Declaration of Independence and the Constitution of the American language. In Websterisms, Lepore and Schulman give a guided tour of his handiwork." -- Richard Brookhiser, author of George Washington on Leadership

"Websterisms is a carnival for language lovers. This entertaining and illuminating look at Webster and his eccentricities represents the best kind of scholarship: solid but never dull." -- Kitty Burns Florey, author of Sister Bernadette's Barking Dog

Jill Lepore is the David Woods Kemper '41 Professor of American History at Harvard University and a regular contributor to The New Yorker. Her books include A Is for American and Blindspot, a novel written jointly with Jane Kamensky.

Arthur Schulman is a retired cognitive psychologist and veteran crossword-puzzle constructor whose puzzles have appeared in The New York Times for many years.
Loading...
or support indie stores by buying on