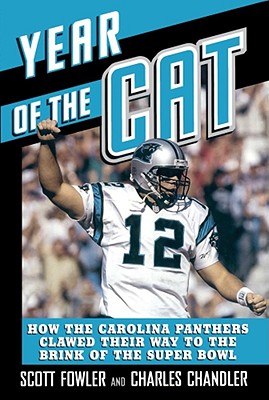 The Year of the Cat

Nineteen-ninety-six was a glorious season for the Carolina Panthers. They went 12-4, won all their home games at Ericsson Stadium, and in just the second season of their existence, beat the San Francisco 49ers twice and knocked the defending Super Bowl champion Dallas Cowboys out of the playoffs. The Panthers' unprecedented playoff run was eventually derailed by the Green Bay Packers in the NFC championship game, but not before Carolina had already established themselves as part of the NFL's elite. Nineteen-ninety-six was the year the Panthers made a name for themselves nationwide. It was the year of the cat.

When Panthers' owner Jerry Richardson announced to the world in 1993 that Carolina would win a Super Bowl within ten years of their first season, many thought he was speaking out of turn. But after Carolina's stunning second-season success, his prediction seems conservative. With Richardson, general manager Bill Polian, and head coach Dom Capers, the Panthers have franchise-builders who can keep the team atop the NFC West for years to come.

In Year of the Cat, award-winning journalists Scott Fowler and Charles Chandler go behind the scenes to explore Carolina's successful second season, and in doing so paint a vivid portrait of the players, the coaches, and the personalities that gave the team its identity and its first shot at winning an NFC championship: franchise player Kerry Collins, the Generation X, hard-throwing, hard-partying quarterback whose off-the- field behavior sparked controversy at a team meeting that turned the Panthers' season around; Kevin Greene and Lamar Lathon -- "Salt & Pepper" -- two ornery All-Pro linebackers whose distinct differences off the field translated into immediate success on it; Bill Polian, the fiery GM whose hard-nosed negotiations and astute football knowledge helped piece together a winning combination in the Carolinas; Wesley Walls, the good ol' southern boy from Pontotoc, Mississippi, whose lilting drawl and exciting play gave Carolina fans something to root for; Eric Davis and Sam Mills, the perceptive veterans and locker-room leaders whose defensive performances sparked many to emulate their inspired play; and Dom Capers, the meticulous, obsessive coach whose game strategy and leadership brought the fledgling franchise to the brink of the Super Bowl.

Like any team and any franchise, the Carolina Panthers had their ups and downs: from the Reverend Billy Graham's inspiring dedication of Ericsson Stadium to the suspension of center Curtis Whitley for a drug-abuse problem that was never fully revealed until now, Fowler and Chandler chronicle the ins and outs of the Panthers' second season. From the sweltering heat of the Carolinas to the frozen tundra of Lambeau Field, Year of the Cat is the inside story of the meteoric rise of the NFL's most beloved new franchise. Told with the wit, candor, and unflinching charm that have captivated the readers of The Charlotte Observer for two NFL seasons, Year of the Cat is a football fanÕs dream and a Carolina fanÕs keepsake.

Scott Fowler and Charles Chandler are award-winning reporters
who have covered the Carolina Panthers for The Charlotte Observer
since the team's inception. They both reside in Charlotte, North Carolina.

Scott Fowler and Charles Chandler are award-winning reporters
who have covered the Carolina Panthers for The Charlotte Observer
since the team's inception. They both reside in Charlotte, North Carolina.
Loading...
or support indie stores by buying on