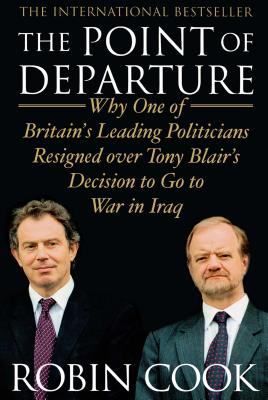 On 17 March 2003, Robin Cook, Leader of the House of Commons and former Foreign Secretary, resigned from the Cabinet in protest against the coming war in Iraq. His resignation speech against that war prompted the first standing ovation in the history of the House and marked the end of the ministerial career of one of Labour's most brilliant politicians. His arguments against that war are of profound interest and importance to American readers.

For the two years prior to his resignation, Robin Cook kept a diary, a personal record of Labour's second term, that forms the core of this narrative. The Point of Departure is Robin Cook's unvarnished account of this dramatic period in British political history. Though surprised by his abrupt dismissal in 2001 as Foreign Secretary, he became determined to effect the changes in Parliamentary democracy that he believed were essential if Parliament was to move into the twenty-first century. As Tony Blair told Cook on offering him leadership of the House of Commons, "This is the job for you."

Drawing on firsthand experiences in the Commons and the Cabinet, of encounters in conferences and corridors and late-night conversations, Cook details his gathering disillusionment with Tony Blair's change of direction, which he believes to be profoundly mistaken, and, above all, the change in foreign policy that led the United Kingdom away from its destiny in Europe and into participation in President Bush's war in Iraq.

This is the inside story of a government in power -- and of the tensions between those who govern. But above all it is the story of a politician who genuinely wanted to bring democracy closer to the people, but who saw a government increasingly detached from the values of himself and his party, and who developed a growing conviction that the government position on Iraq was morally, diplomatically, and politically wrong.

Robin Cook first entered Parliament as MP for Edinburgh Central in 1974. He held a number of senior positions in Opposition -- Shadow Foreign Secretary, Shadow Trade and Industry Secretary, Shadow Health and Social Services Secretary -- before becoming Foreign Secretary in 1997. In 2001 he was appointed Leader of the House of Commons, a position from which he resigned in March 2003 in protest against the imminent war in Iraq.
Loading...
or support indie stores by buying on