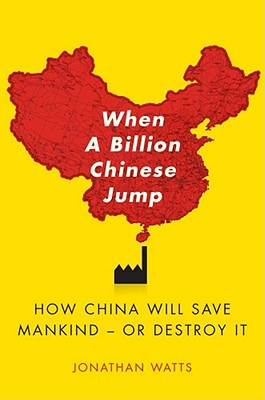 When a Billion Chinese Jump (Paperback)

How China Will Save Mankind -- Or Destroy It

As a young child, Jonathan Watts believed if everyone in China jumped at the same time, the earth would be shaken off its axis, annihilating mankind. Now, more than thirty years later, as a correspondent for The Guardian in Beijing, he has discovered it is not only foolish little boys who dread a planet-shaking leap by the world's most populous nation.
When a Billion Chinese Jump
is a road journey into the future of our species. Traveling from the mountains of Tibet to the deserts of Inner Mongolia via the Silk Road, tiger farms, cancer villages, weather-modifying bases, and eco-cities, Watts chronicles the environmental impact of economic growth with a series of gripping stories from the country on the front line of global development. He talks to nomads and philosophers, entrepreneurs and scientists, rural farmers and urban consumers, examining how individuals are trying to adapt to one of the most spectacular bursts of change in human history, then poses a question that will affect all of our lives: Can China find a new way forward or is this giant nation doomed to magnify the mistakes that have already taken humanity to the brink of disaster?

Praise For When a Billion Chinese Jump: How China Will Save Mankind -- Or Destroy It…

"A fascinating, engaging and beautifully written book. It is a masterpiece."

--George Monbiot, author of Heat: How to Stop the Planet from Burning