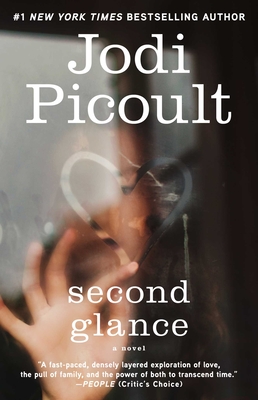 This breathtaking novel from #1 New York Times bestselling author Jodi Picoult asks: Do we love across time, or in spite of it?

“Sometimes I wonder....Can a ghost find you, if she wants to?”

An intricate tale of love, haunting memories, and renewal, Second Glance begins in current-day Vermont, where an old man puts a piece of land up for sale and unintentionally raises protest from the local Abenaki Indian tribe, who insist it’s a burial ground. When odd, supernatural events plague the town of Comtosook, a ghost hunter is hired by the developer to help convince the residents that there’s nothing spiritual about the property.

Enter Ross Wakeman, a suicidal drifter who has put himself in mortal danger time and again. He’s driven his car off a bridge into a lake. He’s been mugged in New York City and struck by lightning in a calm country field. Yet despite his best efforts, life clings to him and pulls him ever deeper into the empty existence he cannot bear since his fiancée’s death in a car crash eight years ago. Ross now lives only for the moment he might once again encounter the woman he loves. But in Comtosook, the only discovery Ross can lay claim to is that of Lia Beaumont, a skittish, mysterious woman who, like Ross, is on a search for something beyond the boundary separating life and death. Thus begins Jodi Picoult’s enthralling and ultimately astonishing story of love, fate, and a crime of passion.

Hailed by critics as a “master” storyteller (The Washington Post), Picoult once again “pushes herself, and consequently the reader, to think about the unthinkable” (Denver Post). Second Glance, her eeriest and most engrossing work yet, delves into a virtually unknown chapter of American history—Vermont’s eugenics project of the 1920s and 30s—to provide a compelling study of the things that come back to haunt us—literally and figuratively. Do we love across time, or in spite of it?