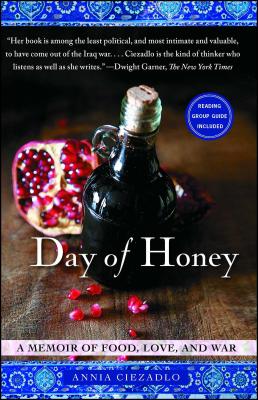 A Memoir of Food, Love, and War

“If you're expecting Day of Honey to read like a typical memoir, think again. A mix of memoir, history, foodie narrative, and war story, this book is really quite amazing. Ciezadlo has the perfect voice for her chosen mix of topics: she's obviously intelligent, insightful yet non-judgmental, and when needed, wickedly humorous. Who knew you could learn so much about war and culture in the Middle East while contemplating the recipe for Kibbeh Nayeh? Bravo!”
— Roni K Devlin, Literary Life Bookstore & More, Inc., Grand Rapids, MI
View the List

Now in paperback, the powerful memoir that The New York Times described as “filled with adrenalized scenes…Ciezadlo is the kind of thinker who listens as well as she writes.…Her sentences make a smart, wired-up sound on the page. Readers will be lucky to find her.”

IN THE FALL OF 2003, AS IRAQ DESCENDED INTO CIVIL WAR, Annia Ciezadlo spent her honeymoon in Baghdad. For the next six years, she lived in Baghdad and Beirut, where she dodged bullets during sectarian street battles, chronicled the Arab world’s first peaceful revolution, and watched Hezbollah commandos invade her Beirut neighborhood. Throughout all of it, she broke bread with Sunnis and Shiites, warlords and refugees, matriarchs and mullahs. Day of Honey is her story of the hunger for food and friendship during wartime—a communion that feeds the soul as much as the body.

In lush, fiercely intelligent prose, Ciezadlo uses food and the rituals of eating to uncover a vibrant Middle East most Americans never see. We get to know people like Roaa, a young Kurdish woman whose world shrinks under occupation to her own kitchen walls; Abu Rifaat, a Baghdad book lover who spends his days eavesdropping in the ancient city’s legendary cafés; and the unforgettable Umm Hassane, Ciezadlo’s sardonic Lebanese mother-in-law, who teaches her to cook rare family recipes (included in a mouthwatering appendix of Middle Eastern comfort food). From dinner in downtown Beirut to underground book clubs in Baghdad, Day of Honey is a profound exploration of everyday survival—a moving testament to the power of love and generosity to transcend the misery of war.

Praise For Day of Honey: A Memoir of Food, Love, and War…

“Her book is full of more insight and joy than anything else I have read on Iraq. . . . Ciezadlo is a wonderful traveling companion. Her observations are delightful — witty, intelligent and nonjudgmental.”
—The Washington Post Book World

“Her writing about food is both evocative and loving; this is a woman who clearly enjoys a meal... A glass of Iraqi tea, under Ciezadlo's gaze, is a thing of beauty.”
—The Associated Press

“In her extraordinary debut, Annia Ciezadlo turns food into a language, a set of signs and connections, that helps tie together a complex moving memoir of the Middle East."
—The Globe and Mail

Annia Ciezadlo received her M.A. in journalism from New York University in 2000. In late 2003, she left New York for Baghdad, where she worked for The Christian Science Monitor. She has also written about culture, politics, and the Middle East for The New Republic, The Nation, The Washington Post, the National Journal, The Christian Science Monitor, The New York Observer, and Lebanon's Daily Star. Annia lives somewhere between New York and Beirut, with her husband, the journalist Mohamad Bazzi.
Loading...
or support indie stores by buying on