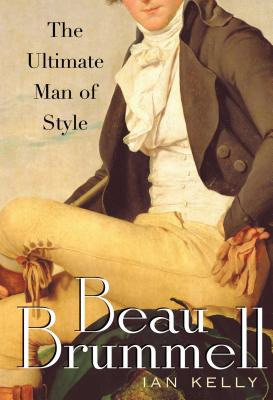 The Ultimate Man of Style

"If people turn to look at you in the street, you are not well dressed, but either too stiff, too tight, or too fashionable."

Long before tabloids and television, Beau Brummell was the first person famous for being famous, the male socialite of his time, the first metrosexual -- 200 years before the word was conceived. His name has become synonymous with wit, profligacy, fine tailoring, and fashion. A style pundit, Brummell was singly responsible for changing forever the way men dress -- inventing, in effect, the suit.

Brummell cut a dramatic swath through British society, from his early years as a favorite of the Prince of Wales and an arbiter of taste in the Age of Elegance, to his precipitous fall into poverty, incarceration, and madness. Brummell created the blueprint for celebrity crash and burn, falling dramatically out of favor and spending his last years in a hellish asylum. For nearly two decades, Brummell ruled over the tastes and pursuits of the well heeled and influential, and for almost as long, lived in penury and exile.

With vivid prose, critically acclaimed biographer Ian Kelly unlocks the glittering, turbulent world of late-eighteenth/early-nineteenth-century London -- the first truly modern metropolis: venal, fashion-and-celebrity obsessed, self-centered and self-doubting -- through the life of one of its greatest heroes and most tragic victims. Brummell personified London's West End, where a new style of masculinity and modern men's fashion were first defined.

Brummell was the leading Casanova and elusive bachelor of his time, appealing to both men and women of his society. The man Lord Byron once claimed was more important than Napoleon, Brummell was the ultimate cosmopolitan man. "Toyboy" to Georgiana, Duchess of Devonshire, and leader of playboys including the eventual king of England, Brummell inspired Pushkin to write Eugene Onegin, and Byron to write Don Juan, and he influenced others from Oscar Wilde to Coco Chanel.

Through love letters, historical records, and poems, Kelly reveals the man inside the suit, unlocking the scandalous behavior of London's high society while illuminating Brummell's enigmatic life in the colorful, tumultuous West End. A rare rendering of an era filled with excess, scandal, promiscuity, opulence, and luxury, Beau Brummell is the first comprehensive view of an elegant and ultimately tragic figure whose influence continues to this day.

Ian Kelly is an actor and writer. He lives in London with his wife, Claire, and son, Oscar. His first book, Cooking for Kings: A Life of Antonin Carême, the First Celebrity Chef, was published in 2003.
Loading...
or support indie stores by buying on