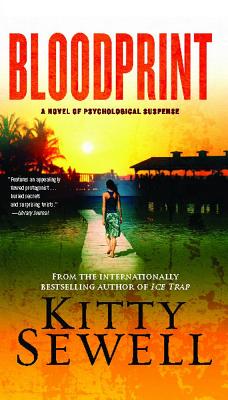 A Novel of Psychological Suspense

When her beloved husband dies in a hurricane, Madeleine Frank flees her Florida home to find solace in the English city of Bath. As a psychotherapist, Madeleine helps her clients deal with the after-effects of traumatic events—but she knows that there are some losses you don’t recover from. .

In a new client, Rachel, Madeleine senses something familiar—but what could she have in common with this abused and angry woman? As the two delve deeper into Rachel’s past, the walls between patient and therapist begin to crumble. Madeleine and Rachel are drawn into a shattering world of evil and set in motion a dangerous series of events that neither woman could have predicted—and neither can control. .

At the heart of the terror lies the fate of a child….

Praise For Bloodprint: A Novel of Psychological Suspense…

"Sewell ties it all together, in a pretty complete package. Her writing is tight, the characterization is well-done...entertaining as a thriller should be." -- Sacramento Book Review

Kitty Sewell, a psychotherapist and a sculptor, was born in Sweden but met her husband, a young English doctor, while living in Northern Canada. Sewell and her family now divide their time between Wales and Spain, where they own and operate a fruit plantation. Translated into more than ten languages, Ice Trap is Sewell's first novel.
Loading...
or support indie stores by buying on